So I Actually Did It... Well, Kind of Anyway 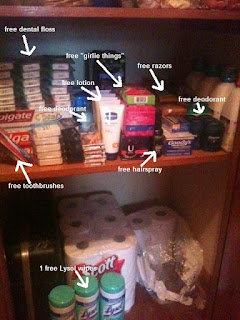 My last post so long ago was all about the show Extreme Couponing that has been running on TLC for the past few weeks.  Like I said before, I've been using them on and off for years but never really on a consistent basis, but that's about to change.  With the combination of periodically checking the website mentioned and taking a peek at store ads (something I never really did before), Sweets and I have been able to get some really good stuff going for the charitable donations that we want to make at the end of the year as well as score some really great deals for ourselves.

I've turned it into a bit of a game and it's actually quite fun.  Cheap entertainment for an activity that I completely hated in the past... shopping.  I hate spending money.  In fact I hate shopping for anything (except shoes of course) and combine that with the pickiness of food sources for two completely opposite people and it's a chore!  But now it's a game and it's quite amusing.

For example, yesterday I received the ads for Marsh and Kmart in the mail.  I looked at them and know immediately when I see something if I have a coupon for it.  I circle the things in the ad that we will actually eat or use and do the math in my head real quick to write the final price next to it.  Make my list on the outside of a large white envelope with the info and drop the ad and coupons inside.  All in all it takes about 15 minutes for me to put it together.  Then off to the fun part!

Since I hate shopping, in and out as quick as possible is the best to keep me from killing someone.  Thursday I went to Marsh.  My goal was to be gone no longer than 1 hour and to spend 20 minutes tops in the store.  I texted Sweets as soon as I walked in.  I go directly to everything that is on my list, make sure the prices match up and grab the quantity that I have on the envelope.  No window shopping and no sparkle will catch my attention because I'm on a mission.  I'm sure I probably missed something good but I only get what is written on the envelope.

I know what you are thinking.  20 Smoked Sausage packs Lanie?  Really?  Well... yeah.  I did it.  They were on sale and I had coupons and smoked sausage freezes really well.  Plus they will be awesome this summer when we have people over for cookouts.  I had 20 coupons for them so heck yes I bought them!  At $1.95 per package it was an excellent deal and I LOVE smoked sausage.

Total cost before coupons was $198.15.  After coupons it was $114.47.  So I spent about 15 minutes looking at the ad, pulling the coupons and putting my envelope together, 15 minutes in the store, 25 minutes total driving time (it was rush hour) and saved $83.68.  I'm pretty happy about it.  Unfortunately it would have been way better if the stores in Indy doubled every coupon.  But they don't and some don't double at all.  Grrr!

Walmart's take yesterday was interesting to say the least.  Dental floss is a good addition to the hygine packs that we have been working on for our charity donation.  With the coupons that I had, I was able to get 30 packages of dental floss with Walmart OWING ME $8.60 for buying them.  Along with another 10 small items for charity donations, I had $8.90 in free money that I was able to apply to other things that I bought.  Before the coupons, the total price for my trip would have been $110.86.  And after (are you ready for THIS?) it ended up being $40.84.  Nothing that we won't use, wouldn't have purchased anyway to give away to charity.  I was amazed to say the least.  Total time for putting it together was 15 minutes.  Travel and in store time was about an hour total and I actually saved $70.02.  It's like money in the bank kids!

Anyway, I guess my point here is that it really does work with minimum effort.  You can't go all willy nilly and start buying crap just because you have a coupon for it.  That's not saving money in the long run.  Unless you are getting it for free, then it's a great charitable donation in the making.  I've gotten quite a few things for free in the past couple of weeks and am really starting to like it.  LOL!


This week's take:
Total before coupons & store discounts= $498.45
Total after store discounts & coupons= $278.29
That's right at 55% off and $220.16 that never left our bank account.  We can eat, clean and do laundry for over a month on everything that I got.
I think we can really start to live with that!  Although you'll never see me turn into one of those crazy coupon ladies.  And I wouldn't want to be behind ME in line anymore at the store.  :)
Happy Saturday my friends!
And... I missed you!
*hugs*
Lanie