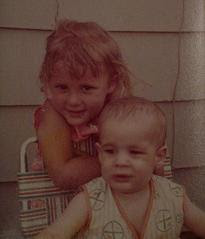 In all of the adventures that I have had, one thing is common with them all.  The psychological process of other people and why they do the things that they do really is based on the environment that they come from and their childhood.  You can't control what happens or what has happened to you over your lifetime.  What you can control is your reaction to it.  Some of you are calling bullshit and others are nodding their head in agreement.  So, let me explain a bit.
I am petrified of deep water and if I can't see or touch the bottom?  Forget it.  I'm NOT going in.  Now this is something that Sweets and I worked on while we were in Hawaii.  I trust him deeply but fear is a funny sensation that is hard to overcome.  I spent time in the ocean when we were there and I actually am ok with it until the water gets about chest height.
Oh, I can swim enough to save myself if I were to ever fall out of a boat or be put into a situation where I HAVE to swim but that's a "just in case of emergency" that my parents unknowingly took care of via swimming lessons when I was a kid.  BUT to voluntarily jump into deep water?  Not gonna happen in a million years and if I ever do end up in that situation, chances are I'll die of a heart attack before I drown. 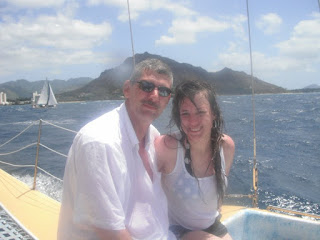 The big question is why?  Why am I so terrified of deep water?  The answer is easy.  I fell into a neighbor's swimming pool when I was somewhere around 2 or 3 years old and I remember it.  I remember putting my feet into the water and I remember being in the water, face up with my eyes open.  I could see the sun through the water and remember how bright it was.  I don't remember who pulled me out of the pool or what happened afterward but I am very well aware that I could have drowned that day.  I remember that the pool was taken down shortly after because my friend and I would climb up on the new jungle gym that replaced it and sing annoying songs to my little brother who ended up throwing dirt clods at us because he was too small to climb up there.
This extreme fear of water didn't really take hold until I became a teenager.  I've never been a water baby or really cared about being in a pool even though lakes have always creeped me out because you simply can't see what's lurking under the water.  I can't prove that a 30ft. fish is in that lake but at the same time, you can't prove to me that it isn't.  So I personally like to err on the side of safety instead of becoming the first recorded person eaten by a new species of fish that formed because of the toxic waste that we have been dumping in our waterways for the past 100 years.
Anyway...
Things that you experience as a child do have a big effect on your emotions and reactions as an adult.  But, as an adult you have the ability of reasoning and processing what happened to make the final decision on how you will react to it when faced with a similar situation.  You don't have to mimic what you witnessed and experienced when you were 2 years old and you saw or experienced something horrible. I remember being absolutely terrified of men when I was very young.  My mother has a suspicion why I had that fear that actually makes sense but I don't remember anything that happened that would have triggered that type of reaction.  When I say terrified though, I mean terrified because I remember that feeling and folks it was deep seeded fear that ran through my entire body.  Like you know you are going to be hurt really bad or lose your life.  The feeling really was just that bad.  If you were a man and weren't my grandfather, father or uncle then you weren't even going to get close to me.
Mom had broke down on the side of the road one afternoon.  I remember the corn fields on both sides of the road and the corn had tasseled so it had to of been in the late summer.  I was 3 or 4 years old because my brother was still in his pumpkin seat.  A Sherrif's Deputy stopped to help and was going to give us a ride home.  Mom had to get my brother and I think groceries or something out of the truck.  The Sheriff's Deputy was trying to pick me up to carry me to the car and I remember wanting NO part of it.  He was a man that I didn't know and that terrifying feeling kicked in.  I remember kicking, screaming and crying trying to get away from him.  My poor mother having to deal with me having such a reaction to someone that is in no way, shape or form ever going to hurt me and on top of it trying to explain why.  I don't remember the ride home but I do remember the absolute terrifying feeling that I had at that very moment in time and a few others.
I'm obviously no longer suffering from that terrifying feeling of men that I had as a child.  I think it was because as I got older and was able to have more control over my environment the fear of harm faded.  But since I've been pondering a few things lately, I can't help but wonder if whatever it was that I experienced or witnessed as a child combined with other negative experiences with men over the years isn't the reason why I've been so unlucky in my relationships with men as an adult?  I know that my desire to have so much control of what I do and where I am very well may be.  Now it makes me just want to kick their asses.  LOL!  But that is not an option because the consequences of that type of action outweighs the satisfaction that it would provide.

But you know what?  I own those fears and experiences, they don't own me.  And with the knowledge of why comes the ability to change it.

Well... except for the fish thing.  That's something I'll probably never be able to overcome.  :)
Those two things that took hold of me as a child were in no way, shape or form any fault to my upbringing or to my parents.  I guess I was quite the Houdini at getting out of the house as a wee one because I've heard other stories of things that I did when I was little that I just don't remember that didn't result in anything bad actually happening except for a good scolding when it was discovered that I was gone.  Maybe that's why I ultimately NEVER snuck out of the house as a teenager, the scolding worked even though I don't remember it!  Again, you can't control everything 100% in your environment and I guess I'm a prime example that no matter how good a parent you are, things will happen that you just can't control.
As an adult, you know that fire burns, if you jump off a roof it's possible to break something and to look both ways before crossing the street or you may get hit by a Mac Truck.  You know that a bullet will kill someone.  That things don't mysteriously come back to life when hit with a boulder or other like objects like the coyote in the Road Runner cartoon does.  That malice and anger can bring violence... but as an adult you should know that it doesn't have to.  YOU are in control of how YOU react to things.
My brother and I were actually lucky as children but I didn't realize exactly how lucky we really were until I became and adult and entered the world on my own.  They used to tease me at one of the first jobs I had out of high school by calling me the sheltered one.  I'm really OK with that label but back then it used to kinda piss me off.  It's not my fault that my parents provided an environment of harmony, calmness and security.  Yes, we had our share of tragedies and problems.  No family is ever immune to that but it's how those things are handled and processed through the adult mind that can really make the difference. 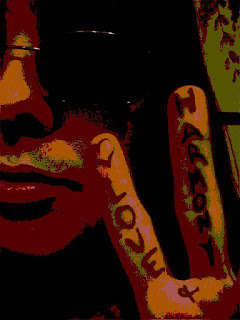 Everything that we do is a learned behavior.  We learn how to walk.  We learn how to talk.  We learn how to drive a car, how to dress ourselves and most of us learn a job that will take care of the things that we choose to have for the rest of our lives.  Even our views and opinions are based on learned behavior.  It's amazing how much we can actually learn in our lifetimes.
So the questions that I am pondering today are:  If we are capable of learning so much as human beings, why isn't it as easy to learn tolerance as it is to learn hatred?  Why can't more people be like my parents were and actually discuss things to find a solution instead of fighting to force something on another person?  When will people learn that you don't have to be a product of your environment and experiences?  Society doesn't ultimately create you and who you are.  You do.
I'm off my psycho soapbox today.  I guess this is what happens when I'm sick, laid up on the couch with brain rotting television and too much sleep.  :)
Happy Thursday!
*hugs*
Lanie