After the bank fixed the issue, our mini-vacation went SO much better and I really must say I actually had quite a few amusing moments... moments of awe... and one or two instances that made me scratch my head for a  second because sometimes I just don't get it.

I stayed up all night the night before we left thinking that I'd be able to lay out in the passenger seat of the truck and get a bit of a snooze in on the way there.  How wrong I was.  I love our truck... I really do... but not only does it have the turning radius of a tank but it is the MOST UNCOMFORTABLE vehicle in the world to try and sleep in.  I can honestly report from personal experience that it was easier to sleep in that old Fiero GT that I had back in the early 90's than in that truck.  So I was just a little bit of a grouch on the way to temporary heaven from lack of sleep.

When you go on a 14 hour drive, it can seem like it takes forever to reach your destination.  So I always try to break it up into smaller sections.  From Indy to Louisville, KY to Nashville, TN to Huntsville AL.  Problem is that Alabama is a pretty freakin' big state when you are driving it north to south.  Like majorly big.  Especially when you know what the prize is in the end.  Sand... sun... and the Piggly Wiggly.

I've always wanted to go into a Piggly Wiggly and I know they have them in more states than just Alabama but I was on a mission.  A few weeks ago when I was at one of the flea markets there was a woman there that had the coolest shopping bag from the Piggly Wiggly and I OH SO wanted one.  So we drove the 800 miles for more than just the beach and I got 2 Piggly Wiggly bags that are extremely cool.  Although I don't think Kroger appreciated it much when I took them into their store for them to put my groceries in.  (Secretly I can't WAIT to take them into Walmart!)

I'm tellin' ya now that these things will become a bit of a fashion trend.  Soon you'll see Walmart, Kroger, Lowe's and other stores shopping bags being carried around as purses.  You heard it from me first and if you start paying attention you'll see what I'm talking about because it has already started!

Anyway... back to the beach.  One of the things that made me say "I just don't get it" were the stores selling what looked like butterfly nets to people to use to catch jellyfish.  Now, you may not know this but some species of jellyfish are edible and the one that is eaten the most in the US is the Cannonball Jellyfish and yes, you can catch them in the Gulf of Mexico.  Their sting isn't as bad as some other jellyfish but I can't help but wonder... what do you do with a jellyfish if you catch it and WHY would you want your kids to play with them?  There were a couple of stings that we knew of while we were there.  Including Sweets' son who was welted across his back while they were a ways out playing in the waves.  (I know grown men don't "play" in the water but I couldn't think of another way to say it.)

Now on to the sharks!  You know there's always something lurking under the water just waiting for the right opportunity to bite your ass when you least expect it.  No, I didn't see any sharks while I was there but there were 2 surfers that were bitten by sharks at Orange Beach... one beach down from where we were at.    Yikes!

Seagulls were everywhere.  I saw a few pelicans in Mobile Bay and a crane which was absolutely beautiful.  The seagulls reminded me of the pigeons in Hawaii or the pan handlers here in Indy.  Annoying little beggars looking for their next free meal.  People!  Don't feed the freakin seagulls when you go to the beach.  It's like feeding the bears at Yellowstone National Park.  They see humans as a meal ticket and get pissed when you don't throw them something they could eat.  I contemplated throwing rocks at them but then again, that's kinda mean in a funny kinda way so I didn't.  Now I classify them as flying rodents when before I saw them as beautiful works of nature. 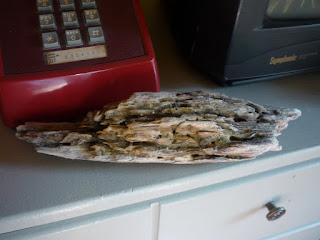 It was a much needed get away that was actually too short.  But then again, isn't any vacation to the beach too short?  I'd love to spend a summer there just walking around and looking for another piece of driftwood to go with the one I picked up.  I secretly imagine that it is a piece of an old Spanish boat that sank way out in the gulf that was carrying gold... and pirates.  In reality it's probably a piece of a tree from Florida or Mississippi but now it's mine and will sit in my office to remind me of the first time I ever saw the Gulf of Mexico.  Because we both know it definitely won't be the last.

So now I can say I have seen two of the three bodies of water that are on my list.  I've been close enough to the Atlantic that I could literally smell the water.  Yeah, had even crossed the Chesapeake Bay Bridge but had to turn around because "we didn't have a map."  WTF?  My answer now would have been to just keep driving east until you hit the damn water and can't go any further.  But I wasn't this brave 10 years ago and Sweets will take me to the Atlantic.  Just because he can and because he loves me enough to do it.

Here's a little something from the Gulf to make you say... Awww!  How cute is that??  It's Sweets, his son, daughter and grandchildren playing in the sand.  They are just TOO cute!

Email ThisBlogThis!Share to TwitterShare to FacebookShare to Pinterest
Labels: travel