I've been on Twitter for a while but haven't been utilizing the account much lately.  I like to be able to respond to people when they send messages on there so I have GOT to remember to log into TweetDeck in the mornings when I fire up my computers!  I've even lost over $25 in Sponsored Tweet income because... I've... been... too... lazy... to... check... it.  Oops.  That won't happen again.  Lazy, lazy, LAZY!  Even though $25 isn't a lot of money at all these days, it's still a few days groceries when I work my coupon magic.  :(

Quite a while back Twitter got this crazy idea to upgrade their site to what they like to call "New Twitter."  Well, in a nutshell, "New Twitter" sucks.  I hate it.  What ever happened to if it isn't broke don't fix it?  I'm sure there are a lot of people out there that like the so called "new" features that "New Twitter" provides.  But it's actually a duplicate of what is there on TweetDeck.  So I imagine they are trying to pull people away from using alternate programs.  Problem is, I like TweetDeck and will continue to use it. 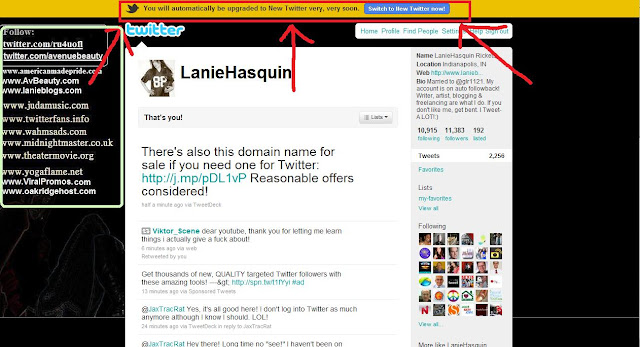 So now Twitter is giving me a warning across the top of my page that I WILL be forced to switch to the "New Twitter" very, very soon.  Problem is, do you see those urls on the side circled in the fresh, minty green?  Yeah, those websites paid for those spots on the background.  It's a one time fee and I made it clear that they would eventually be destroyed by Twitter's insistence that we ditch the old for the new.

If I recall, once upon a time there was another popular website that fixed it's unbroken platform too.  They called it Myspace.  It used to be the big boy of social media and now is just a fraction of what it used to be.  People didn't go to Facebook from Myspace because Facebook was necessarily better.  They went because Myspace became so hard to use that Facebook became the site of choice.

I guess it's just a matter of time before Twitter forces me to conform to their new page.  I'm still holding out, holding on and hoping that it will last at least a little while longer.  But that message up there looks like I may be SOL.  And soon.