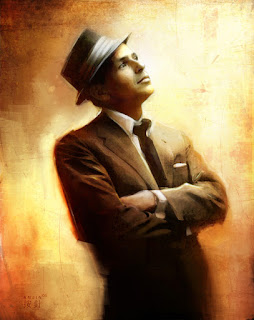 I miss Frank.  He was so cool and the only thing I've ever had to cross off of my Bucket List that I'll never be able to do... see him live.  See him in person.

Well... there's always Wayne Newton.  He's been on the list for a while now too.  But nothing compares to Frank...


Did you know that Frank Sinatra's star started rising in the 1940's singing with the "Big Bands" Harry James and Tommy Dorsey?  He wore suits with ties and cufflinks.  Smoked cigars and drank scotch.  He loved women and of course the feeling was mutual.

I love his music.  If you were a fly on my wall you would witness me in the comfort of my own home laying in the middle of the living room floor surrounded by candle light, and sipping a glass of red wine in between belting out the lyrics along with ol' blue eyes.

The music from his beginning may just be my favorite  It was lively and original.  It's the type of music that is played in one of my favorite movies, The Godfather.  It's the music from an era that has certainly passed.  Funny thing is that even though I wasn't there, I actually feel like I miss it.  Weird. 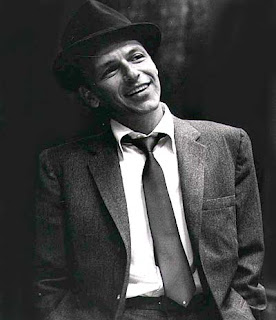 I wasn't crushed when Frank passed away like I was when Elvis died.  I was 5 when the King took his dirt nap and I actually remember crying when it happened.  I was a little older for Frank's passing, 28.  But I still remember thinking that it sucked.  I'll never get to hear my favorite Frank Sinatra songs live.  *sigh*

There's no one that has been as popular as Frank Sinatra that I can think of off the top of my head.  You may not know this but he was the original Danny Ocean.  A member of the Rat Pack.  It's rumored that Las Vegas wouldn't be what it is today if it hadn't been for Frank Sinatra, his celebrity and ability to draw people in.

So my friends, I have a little gift for you today.  Whether you are doing the dishes, working on a report or just surfing the web you'll be able to enjoy a little Frank.  And if you don't want to listen to the whole list, at least take a listen to the first song.  It kinda puts life in perspective.  At least for me it does.  Your'e welcome.  And I hope you enjoy it! 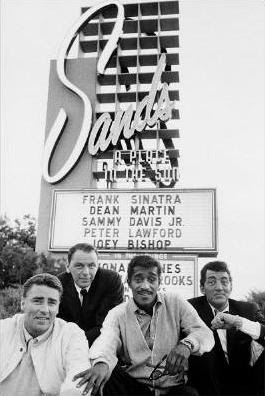