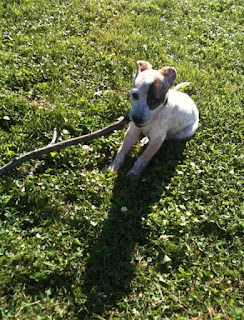 So we have had the sweet little Spudward in our house for almost two weeks now.  You can learn a lot about a puppy and "who" or what he will become as an adult dog in that amount of time.  And I'm here to tell you that in a nut shell, Spud is... well... a poop eater.

I suspected quite early that he would be what I call a stink roller.  Meaning that he likes to roll in the grass and anything that just happens to be in it.  I can already see potential blogs about just how nasty he will be once he's grown into an adult dog.  I imagine he'll find dead animals, mud holes and of course poop to roll in if he's not watched.  All I can say right now is thank goodness for deep sinks and dog shampoo.

We have been taking a walk around the garden every evening just to check things out and give him a bit of an idea to where his yard ends.  The end result will hopefully be him not having to be on a leash all the time like we have to do with Sophie.  While taking our "garden" walk the other day, he ran up to a spot close to the corn and started eating something.  Granted he eats rocks and sticks, it didn't don on me what he was eating until about 45 seconds into it.  He had pooped in that exact spot the day before and returned for a snack.  How freakin' gross is that? 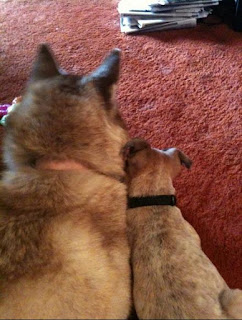 Then I caught him again eating poop in the front yard... twice.  Spud likes his poop aged just tiny bit.  24 hours is sufficient for him and although I'm not pondering his reasoning on this, I can only suggest that it's because it isn't quite as mushy.  (I can't believe I just said that.)

Of course when I told Sweets about it, his first words came right out of that smile.  "And you kiss him!  Ewww!"

Yeah, I did used to kiss him on the snooter but not anymore.  Blah!  Makes me cringe just thinking about it.

But on the flip side he does now know what "sit" and "lay down" means and will usually follow directions accordingly.  Under protest most of the time but he does it none the less.

My mom said that Spud should be in a Pedigree Dog Food commercial.  I personally think she may be on to something there because he's kinda cute and has a great personality.  Maybe I'll send them some photos and video of him.  God knows I have enough of those that I'd have no problem proving to anyone who he belongs to!

If I could get him to sit still for a moment, I'd take photos of him in a top hat and tuxedo.  Only because I think photos of him sitting down in that outfit would be drop dead awesome.  :)  Come on, you know it would be!  Right?? 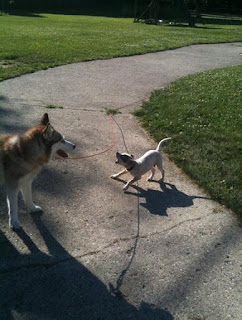