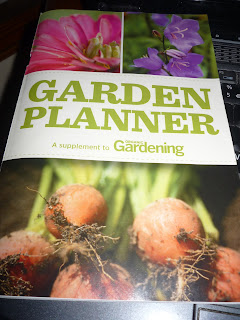 I finally decided to start a garden journal and start keeping track of everything that I plant each year.  A lot of gardeners do that so they can see what they have done in the past, what plants work best for them and keep record of any gardening disasters that may happen along the way.

What kind of red tomato did I plant in 2012?  Oh yeah, it's right here in my journal.  That was the year that I planted those Big Boy Hybrids.

It will all be in the journal for reference.

What prompted me to decide to do this right now is that I received a free booklet in the mail from Organic Gardener Magazine.  It's a neat little book that has a LOT of information in it.  If you want to get one for yourself, just go to their website and scroll down to the bottom where you will see a green bar that says "Free Trial Issue and Free Garden Planner."  I haven't received my trial issue yet but the Garden Planner is really cool!

Unfortunately there isn't enough writing room in there for everything that I want to take notes on.  So I need to put together a garden journal. 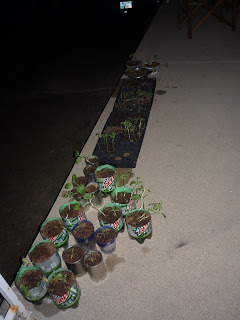 I spent part of the day today transplanting seedlings from their cells into what I call "hillbilly pots."  It's kind of along the lines of hillbilly tupperware.  I saved some Diet Mt. Dew bottles, cut the bottom out of them and turned them into the pots to hold the seedlings for their next round of growing and final hardening.  There's also 2 plastic Speedway gas station cups, quite a few tin cans (washed and labels removed), a Kroger ice cream sherbert bowl, a Cool Whip bowl and a silver bowl that I have no idea where it came from because it was in my flea market stuff.  Hence the term "hillby pots."

The pumpkins and watermelon plants are deep root plants meaning they won't live long in the smaller cells (or cardboard TP rolls for the pumpkins).  Those guys were in desperate need to transplanting.  Tomato seedlings need to be dropped about an inch deeper into the dirt to build a better root system and thicken the stems up.  Almost everything else was just getting too large for the smaller, 6 pack cells.  I still don't have the beds all completed and haven't gotten the dirt yet but there's no hurry.  Even though I wanted to already have everything in the ground, I'm glad I didn't because of the hard frost Indy has the night before last. 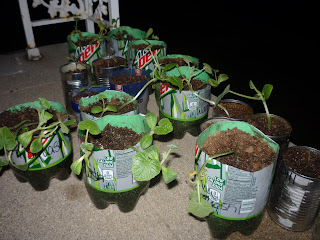 As long as everything is in the ground by the middle of May, it's all golden.

Of course I'm doing another little experiment.  I dropped 18 beans into 18 of the cells that I emptied today.  It really doesn't matter if this works or not because I can always direct sow but I'm curious to see if I start the beans if they will produce sooner and longer this year.  We shall see!

So right now my seedling inventory is:

Still in the 6 pack trays. To be transplanted this week to hillbilly pots. 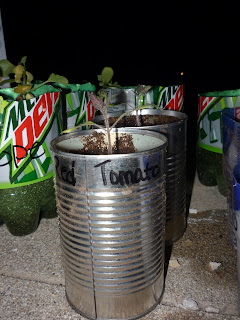 There is of course more plants that I want to add but will have to do the garden center thing (UGH!) to get them this year.  Next year I will definitely be better prepared.  It's a lot of work getting this little enterprise off the ground but next year will be even better.

Tomorrow I'm planning on getting the onion sets in the ground where the herb garden will be.  It's supposed to rain but you know what happens when it rains, right?  Yeah, you get wet.

Like I did today when covering the meatie pen outside when the downpour started.  Those little buggars startled me too.  When I went back out to bring them in after dark they were all huddled together in a covered corner of their make shift pen sleeping.  I thought they were dead at first until I reached in to touch them.  They sleep harder than I do which is pretty freakin' hard!

It really is all starting to come together nicely though.  Just a few more things to cross of the to do list and that back yard will be looking exactly like I want to.  Pretty, productive and a lot less grass to mow.

Happy Monday my friends!  Or at least what's left of it.

Email ThisBlogThis!Share to TwitterShare to FacebookShare to Pinterest
Labels: garden