Meaties and Other News From the Home Front...

I really hated to do it but the meaties have spent the last two nights outside in their makeshift pen.  I've been sleeping lighter than I normally do keeping one ear toward the open window in my bedroom and one hand on a flashlight.  The weather has broken in Indiana and it's been extremely warm the past few days but I'm not really worried about the weather.

Honestly, I debated this decision.  Mainly because their pen is not a permanent fixture and doesn't actually have a proper lid.  It's a hillbilly pen.  Something that I threw together out of the two raised bed boxes that I recently built, a piece of lattice work, some chicken wire and a few of the old fence pickets.

At night I've been putting a painter's tarp over the chicken wire and leaving the lattice work area open for ventilation so they don't die from the heat from morning sun before I get out there to uncover them.  I haven't been sleeping well lately so my whole daily routine has been knocked all to hell and I've been sleeping later.  That means the dogs, layers and Kiev go outside later and the meaties get uncovered later. 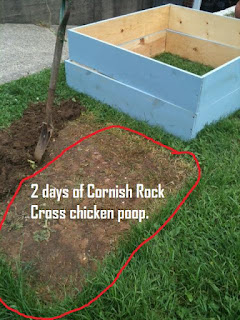 Why did I move them outside?  There's one reason and one reason only.  The Cornish Rock Cross is the nastiest smelling bird I have ever encountered.  I guess if I had to compare these birds to anyone, it would have to be Fat Bastard from the Austin Powers movie.  Yes, they are just that nasty.  I can't wait until "D" day.  I know that sounds kinda bad but the stench really is something to behold.

I will give them credit for making up my mind on where to plant the pumpkins.  Inside that red circle on that picture is two days of Cornish Rock Cross chicken poop.  They did this on top of grass that looked exactly like the other grass that's around it before the pen was put there.  In two days.  Five birds.  In TWO days!

I decided to hand turn the soil (to kill the smell) and let it mellow for a few days.  If I do this every two days, I'll have the perfect place pre-fertilized to grow pumpkins. 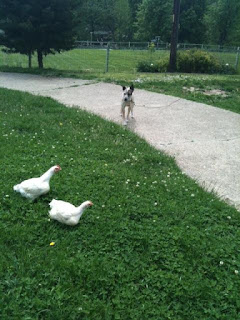 Since these are the type of birds that most commercial chicken growers use, I can actually understand why a lot of people who haven't spent much time around a real chicken coop but have driven by or lived around chicken barns think that chickens stink.  No, chickens don't stink.  Cornish Rock Cross chickens stink.  I am only dealing with five this time and can't imagine how bad the smell has got to be for people who get a larger number.  If these were the only kinds of chickens in the world, I would NOT have chickens, period.

Anyway, I'm a bit worried about them being in a makeshift pen overnight.  There's Spudward during the day (Sophie is NOT outside when the chickens are) and raccoons, opossums, stray dogs, werewolves and who the hell knows what else lurking around my yard at night.  There's a number of factors that could lead to a chicken's demise pretty quick out there if they aren't properly protected so this is a bit of a crap shoot.  I just can't take the smell of them being in the pens the garage anymore and that outweighs the other.  Cleaning their pens in the garage every other day (sometimes every day) really takes up too much of my time because there are way too many other things that need to be done around here.  The hen pen only has be cleaned out once a week and it doesn't smell bad at all.

Today was coop day.  Since the next couple of weeks are planting weeks, the coop has GOT to be finished over the next couple of days.  I've made a few changes to the design of coop 1.0 so I guess you could say that now we are on coop 1.5.  I'll explain all of that part later.

Taylor came over and helped with the coop and that girl has got some hammering skills!  Justin stopped by when he finished work and put the "siding" on the front.  Taylor and I got 2 of the interior walls installed and 1/2 the strapping that holds the vinyl floor in place finished.  It's starting to look much better already and hopefully everything except the eco-roof will be completed tomorrow but I hope to have it topped too.  Those kids were a life saver today!

I would have finished the coop earlier but my neighbors in the back were installing a new fence and I didn't want to do anything that would interfere with that so I put the coop on the back burner for a couple of weeks.

Oh yeah, I didn't tell you about the fence... 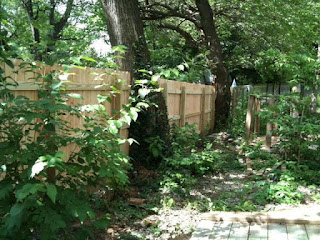 I had started to remove the old fence because it was going to need either replaced or some serious repair work because of age and the vine that was growing on it.  After talking to Sweets about it, we decided to not replace it because it too was going to be eating up too much of my time to maintain and keep up with the repairs.  Even replacing it would mean I'd have to maintain it and that just wasn't something I was going to have time for this year.

My neighbors in the back liked having the fence.  I did too, but it was a time issue.  So they replaced the fence and will be maintaining it, thank goodness.  That's one thing off of my plate that I don't have to worry about anymore.  And, as you can see in the photo, it really is a nice fence!  They are so nice.  It's nice to have wonderful neighbors and I surely lucked out on that one. 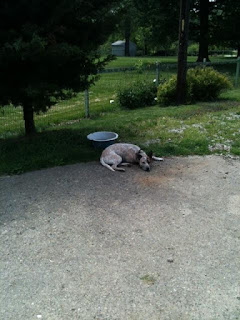 Putting all of this together has been an adventure, and it's really just getting started.  If all goes as planned, by the end of spring, there will be a lot of life going on in this back yard.  As soon as the chickens are settled in their coop and everything is in the ground this will be a sight to see.  There hasn't been much of a visual change yet even though a lot of work has already been done.  In a week or two, the transformation will just be amazing.

In the mean time, I did get some onions, black oil sunflower seeds, bachelor buttons and hollyhocks sowed and some "live forever" plants transplanted around the porch steps while Spuddy laid on the cool concrete and slipped between napping and watching me work.  The hollyhocks won't bloom this year and that's why I put some sunflowers in with them but next year they will be amazing.  I've always wanted hollyhocks and next year, I'll finally have them.

Tomorrow is more coop work, hopefully tilling the ground garden and getting the corn sowed.  I have a lead for free mulch which would be fantastic since I'm going to need so much of it this year.  My ultimate goal is to have the most self sufficient 1/2 acre in Marion County.  If all goes as planned, it will be successful.

Happy Friday my friends!  (Or what's left of it.)