Update on the Meaties... 72 Hours Till D-Day

I encourage you to read it because it's information that you should know but I feel the warning is necessary just in case you are a pansy when it comes to facing the truth about where your food comes from. 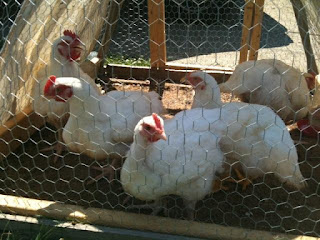 The meaties have entered their final 72 hours, D-Day is this Saturday.  John and my nephew are coming over to help me process these five chickens that I've been raising since they were a couple of days old.  Don't worry, I am not going to post any graphic photos of chicken processing.  I consider it a private thing between the chickens, John, John III and I.  It will be a learning experience for my nephew and I'm really happy that he has chosen to take part.

If you want to see how it is done, I can recommend a couple of videos that feature the process that we use.  Just email me and I will send them to you.

These chickens have taught me a few things over the past couple of months.  They have taught me the importance of knowing exactly where you food comes from.  That we as a society have become so disconnected with what the process is for the food that ends up on our dinner table.  Especially the meats that were once living, breathing things.  This isn't something we do for fun folks.  Ending a living thing's life is never fun but it is a necessary part of life that happens every day.  It's part of nature although most people in my generation and younger have never experienced it.  We have been sheltered to the point that most are horrified at the thought of having to collect their own food.

I'm not surprised by some of the comments I receive when I talk about the meaties.  People wonder how can I do something like this?  How could I raise something and then take its life with my own hands?  My response is how can you support the commercial chicken industry with all of the cruel and inhumane things that they do to those chickens that you put on your table?  Ignorance is bliss for most people because if they knew, they wouldn't eat it.

When you buy chicken at the grocery store, what are you really buying?  How was that bird actually treated?  Was it allowed to be a chicken?

The government's definition of free range chicken is a chicken that has been allowed 5 minutes per day of outside time.  A "cage free" chicken is a BS marketing tactic.  It's psychological to make you feel better about buying chicken that is STILL being raised the same way.  Commercial chicken farmers don't raise their birds in cages, they never have.  The photos of chickens that you see in cages are commercial laying hens, not meat chickens.  Cage free and free range chickens are birds that are crammed into chicken houses by the thousands.  Some have their beaks cut so they don't do what my chickens did to each other with the pecking.  That's an industry standard to prevent them from hurting each other and if you buy eggs at the store, the chicken that laid that egg did have their beak cut.  The chickens are trucked to the slaughter house where they actually SEE what is happening to the chickens that go before them.  Chickens are stupid but they aren't that stupid.  They are very well aware of what pain sounds like and they do feel emotions such as fear.  I've seen it in both my flocks of chickens. 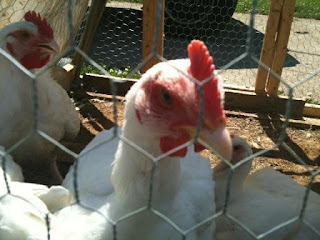 The first step to killing a chicken in a slaughterhouse is hanging them from moving racks upside down by their feet.  Let me snatch you up after a long ride in the back of a semi and hang you up by your feet and see if it doesn't scare the shit out of you.  Sometimes their heads are dipped into electrified water to try and stun them or they have a rod inserted into their beaks to stun them.  Sometimes a chicken lifts its head and misses the dip.  Then they are either swung past a large saw blade that cuts their throats or their throats are sliced right after they are stunned in plain sight of the next chickens in line.  The majority of chickens that go through the saw do get their throats slit, but some again lift their heads and the saw misses them.  Then they are completely dunked into a tank of scalding water.  The chicken that missed the saw blade will feel the burn of the water and is killed by being drowned which is one of the most inhumane ways to kill an animal.

That's the chicken that is on your grocery store shelf folks.  That's what you put on your dinner table.  The carcass of an animal that spent their entire lives in misery and died a horrible death.  Eat up.

My chickens will be held as they die.  I will probably cry for them and will thank each one personally for what they are doing for my family.  It will be over quickly with as little pain as possible for the chicken and the others won't see or hear what is happening to their flock mate as it progresses.  They have lived be it short lives, but good lives.  Being able to be all things chicken that chickens like to do.  They have lived outdoors.  Been able to run around.  Eat grass, worms and bugs.  Flap their wings and run when something startled them or scared them.

That's the difference between an abused, inhumane, horrific death of a commercial chicken and the peaceful, humane, thankful death of a chicken raised by a person who cares about the animal.

Raising these chickens have brought back memories.  Growing up, my grandparents had chickens, turkeys, ducks, pheasants and rabbits at different times.  I remembered feeding them when I was a kid and playing with the ducks.  I also remember processing time.  I never witnessed the poultry being processed but my brother and I did see and help with fish, rabbits, squirrels and deer.  The image of my mother and my grandmother butchering deer is burned into my mind.  It's just how things were done back then.  It's the old way of doing things.

These guys will receive their last meal on Friday.  It will consist of their feed, scrambled eggs (which they LOVE believe it or not) and corn on the cob.  They will be out and about around the yard enjoying their last day in the sunshine and just being chickens.  They were bred to feed us, it's their purpose.  My responsibility was to raise them well and happy and my reward will be thanking God for them every time I make something wonderful with what those chickens are giving us.

Now, don't get me wrong.  I know that raising and processing your own meat isn't for everyone.  Like I said, we are a generation of disconnects from our food system.  What I am saying is don't sit down and eat your grocery store bird who lived a life of hell and was inhumanely and coldly killed and criticize the ones who choose to do it differently and more humanely.

In fact, here's a video produced by Brower Equipment who is in the business of selling chicken processing equipment to slaughterhouses.  It shows the process of how the commercially raised bird is processed from start to finish.  A few things that I noticed where that the people aren't wearing gloves, there is stuff on the floor and it just looks dirty.  And what are they spraying on the chicken at 7:23?  It's a bit graphic but if you eat commercially processed chicken, you should really watch it.