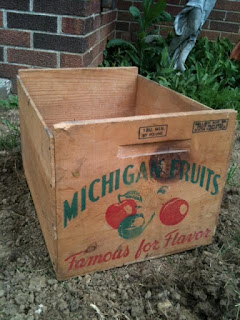 Remember when I told you the other day that I planted onions?  Well, I didn't mention where or how because that post was quickly turning into a book of it's own so I decided to save this cool little tidbit for today.

I have quite a few old wooden boxes and crates laying around the garage and in the house that I've used for different things over the years.  I've always really liked one box in particular, this old apple box.  I bought it at a Goodwill store for around $1.50 over 10 years ago and it's held everything from hair accessories to yarn since I've had it.

I found it empty the other day and decided to make a planter out of it for onions and put it into where the herb garden is going to be.  It took a whopping fifteen minutes from start to finish and it will look really neat when the bed is completed.  At least I think it will!

I raked the dirt into a flat surface for the box to sit on then grabbed a shovel and two buckets and headed to the back of the yard.  There is some really NICE dirt back there so I shoveled two bucket fulls to use in the box.

When you shovel dirt from one part of your yard to another, you'll want to remember to sift through it and take any sticks or other undesirable things out of it.  Break up the clumps so the dirt is crumbly so any of the worms that are in the dirt can do their job by moving around freely.  This dirt has been sitting creating a compost for years underneath the tree cover out back.  It's dark and I bet I saw 30+ worms in just those two buckets full! 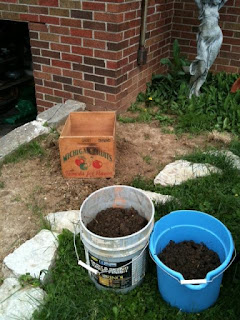 If you missed John's post on "The Hunt for Red Jumbo" you'll want to check it out to see why worms are needed and are completely awesome for your garden!

The dirt gets dumped into the apple box and sifted through again to make sure there's nothing in there that isn't supposed to be.  Then it was ready for the onion bulbs.  I planted 8 onions in this box.  It may have been a bit much but they are supposed to be spaced 3" apart and I put them 3" apart so we will see how it goes.

I also took about 15 minutes and made another box for onions that will be sitting a little further down than this one.  It will also hold about 8 onions so I'll have 16 onions to choose from every time I go out to the herb garden to get ingredients for something awesome this summer.

The onions I used are yellow onions.  Not as harsh and "oniony" as white onions and not quite as mellow as purple.  Maybe next year I'll be braver and start my own onions from seed.  This year I whimped out and bought the set for planting.

Any onions not planted in the boxes in the herb garden will go into the ground bed with the corn and a few other things that are slated to be grown there.  There will be a lot of sliced and diced onions in my freezer this year and the thought of that just really, really makes me happy!

Onions, in addition to pumpkin seeds, are a natural wormer for chickens.  Not that my chickens have worms because they don't, it's just a useless bit of information from Lanie that you need to know if you ever decide to get chickens.

I'm pretty pleased with my apple box planter.  We'll see how it works out this year but I'm guessing it would be no different that growing them inside a raised garden bed.  At least that's how it appears to me when I look at all of that beautiful, black and nutrient rich dirt!

In the world of chickens, there's a countdown on "D" day for the meaties.  14 days and counting as long as nothing happens in the outdoor pen.  I think now that I have done my trial run with the first five that I'll do ten this fall.  Ten is the perfect number for these guys because it gives me a few chickens to give away if I want to and plenty of chicken until the next batch is done the following spring or fall, depending on what time of year it is.  I'll do an add on to the coop before the meaties arrive this fall to keep them out of the garage and away from the house.  They can free range when they are out of the pen.  The current five are doing very well like that. 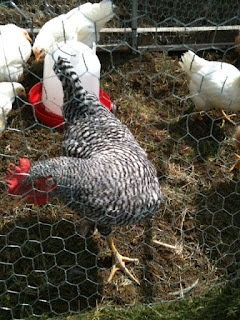 There's also a new addition to the flock.  He's a Barred Rock, 4 month old rooster.  Absolutely beautiful.  His name was originally Tina because he was supposed to be a girl.  I can imagine the original owner's shock when Tina turned out to be anything but.  Their neighbors were almost an arm reach from the coop so a rooster wasn't going to work for them.  He was a give away and I picked him up a few days ago.  I love him because he's kind of a jerk but he comes right to me whenever I walk up to him when he's loose.  So I decided to call him Zeus.

He crows but only in the mornings and so far only for about 30 minutes.  Between 7:30am and 8:00am then he stops.  It's not loud but you should have seen Sophie and Spuddy the first time they heard it!  They were turning themselves wrong side out trying to locate the source of the "noise."  It was quite comical.  Since he's not the only rooster in the area, I'm not really too worried about him hanging out in our coop when it's finished.  (Which will FINALLY be any day now! YAY!)

He's a great rooster and will be able to stay around... so far anyway.  :)