The Escape Artist- How to Catch a Chicken 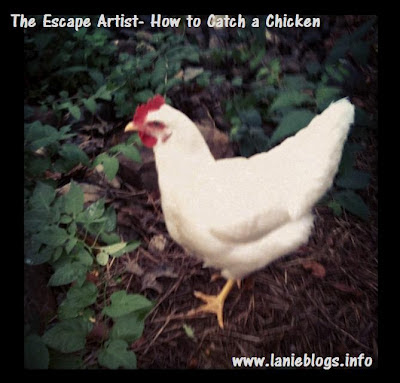 You may remember Marsala.  She's the hen that gave me so many headaches and was the evil ring leader until I had to break up the "Mean Girls" club that she started when the chickens were little.  Well, she's learned a new trick that is completely pissing me off once again.

I go out to the coop at least twice a day, sometimes more often depending on what the weather is like and what's going on in their house and mine.  When I open the door, everyone is usually standing there staring at me to see if I have any food for them.  I either throw something to the back of the coop for them and they take off after it like starving dogs, or I go ahead and reach for the water container to change it.  I guess you could say it's a ritual.  I'm a creature of habit and seem to do things in the same order quite often.

Marsala had kinda faded into the flock after I reintroduced her a few months ago.  I'm not even 100% sure now which hen is actually #1, although it's blantantly obvious that Curry is in last place.  Sometimes I feel sorry for her because those other hens can be mean.

Here's what has started happening... I open the door.  Throw the food.  Zeus and the other 6 go for the food but Marsala doesn't.  When I reach for the water container, she zips right past my leg and out the coop door.  NOOOO!  I HATE trying to catch a chicken.  Hate it!

The last few times she's done it, I just finish whatever I'm doing.  Fill their feeder, collect the eggs, pick up Dumpling to scratch her belly and give Zeus the stink eye and tell him if he bites me again his next destination is called crock pot and I've got one in the closet.  When I'm done, I go back out to see where Marsala has wound up.  She never goes far.

People look like idiots when they take off running to chase a chicken.  You have to be slick.  Like a predator in order to catch one of these idiot birds.  I always steer Marsala toward the flower pot that is sitting on the ground by the coop.  When she gets between it and the fence, she's trapped and I can bend down to pick her up.  It's easy but I know one of these days she's going to get an extra brain cell and realize that if she goes there, I'll catch her.  So she won't go there.

I'll figure something out to keep her from escaping.  I think she's doing it just because she can because she's that kind of chicken.  Otherwise she'd run off, and she doesn't.  It's just annoying, although it is kinda funny too in a bird brain kinda way.

Stupid chickens... but I admit that they really do crack me up.  And, I love them.