Three Things You Can Do With Two Fresh Pineapples! Can It, Drink It, Feed Pineapple to Chickens...

So I was lucky enough to come across an online coupon for Dole pineapple on their Facebook page for 50 cents off one fresh pineapple.  THEN Kroger ran them on special for $1.50 each which means that I snagged 2 pineapples for $1.00 since they doubled the coupon.

In my mind I had fifteen million things that I could do with that pineapple but they ended up sitting on the counter for a week since out of the blue, my body decided to protest and I ended up getting sick.  I kept saying "I need to do something with that pineapple."

Last night ended up being pineapple night for me.  I'm not one to waste any portion of anything edible so I actually came up with three things that could be done with those two fresh pineapples.

I cut up the two pineapples.  Took out the cores and used it with a sugar and water mixture to make a simple pineapple syrup and packed 3, 1/2 pint and 2 pint jars full of the pineapple pieces.  Topped them with the syrup, got all the air bubbles out and processed them in my water bath canner.  Pineapple is high in acid, like tomatoes, so they are perfectly safe to can this way as long as you know how and do it correctly.

What you are actually looking at are the beginnings of the best 5 pineapple upside down cakes EVER. 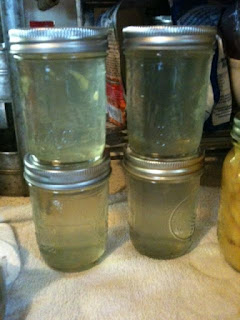 Make a Bit of Hillbilly Spirits

No, it's not moonshine but I was trying to figure out what to do with all the left over pineapple syrup when it donned on me that I had a bottle of Malibu in the fridge.

So I ladled 3/4 cup of the syrup into each 1/2 pint jar then topped them off with a little under 1/2 cup of Malibu in each one.

They were processed so I don't have to keep them in the fridge.  I don't THINK the temp was high enough to do away with the alcohol but I'll be testing that theory when I crack one of these babies open later this week and let you know.

In a nutshell, this is the home made version of the already mixed drinks that you can buy in the stores now.  Difference is, it comes in its own glass and I was able to control the amount of liquor that was in it.  I see these unprocessed in a big tub of ice this summer.  How much fun would that be? 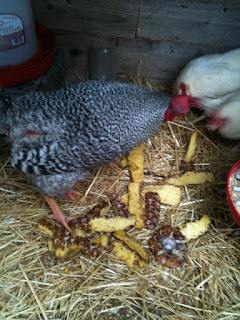 So there were all of those peels with some pineapple attached to them left over after skinning the pineapple.  Since I have miniature garbage disposals living in my back yard,  The chickens received the remainder of the two pineapples.

At first they really didn't know what to think about it.  Zeus finally took a taste and realized that it was in fact good stuff so the hens fell right into place with it.

I wouldn't recommend feeding pineapple to chickens very often though.  It naturally breaks down protein and even though it does make protein easier to digest, it also BREAKS it down which could cause a problem with the amount of protein the hens need for egg production and when they are going through molt, a common happening in chickens this time of year.

So, I spent a buck on two pineapples and have 3 1/2 total pints of canned goodness, enough hillbilly spirits to get me drunk once and a nice snack for the chickens!  I'd say it was a dollar that was very well spent.  :)