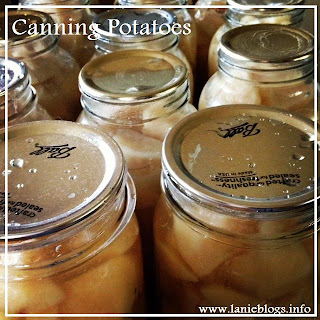 Meijer had a great deal on white potatoes recently, $1.00 for 5 pounds.  White potatoes are my favorite.  These potatoes are softer than other types and have an unmistakable buttery taste and texture to them when they are mashed.

We eat a LOT of mashed potatoes around here.

With the recent addition to my kitchen arsenal, a pressure canner, I decided that it would be a good idea to buy $10.00 worth of those potatoes and can them for future use.  Home canned potatoes are nothing like the potatoes that come out of tin cans that you buy in the store.  Home canned potatoes aren't crunchy on the outside like tin canned store potatoes.  They are perfectly cooked inside the jars from the canning process and will simply need to be warmed up for a few minutes before being used for whatever suits our fancy at the time.

Have you ever seen 50 pounds of potatoes?  It's been a LONG time since I had but here ya go... 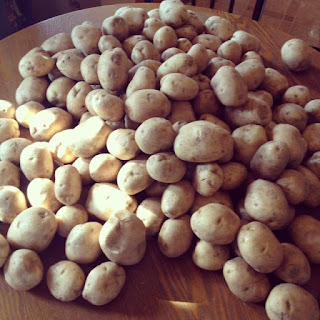 Funny thing is, 28 quarts will probably last us about 6 months.  Give or take a week or two.  They MIGHT last until it is time to dig up the new crop that I'll be growing in the gardens this year.  If they don't, that's ok.  I don't do this because of finances.  The money savings is just a bonus that I discovered after the fact and I am telling you that doing it yourself is worth it financially if you need to cut your grocery bill.  I do it mainly because I can and I like it.  It's more convenient to pop open a can of potatoes instead of peeling and cleaning them.  Canning my own keeps us away from the boxed crap that will eventually give us cancer or some other jacked up disease from the additives and preservatives.  GMO's haven't made it to potatoes yet (that I know of) but chemical additives in boxed and pre-made potato dishes have.

Potatoes have to be canned in a pressure canner/cooker in order to bring the internal temp of the jar to 240 degrees, which is the temp that kills botulism.  Water bath canning, while good for tomatoes, jams and jellies, only reaches 212 degrees.  It will never get any higher than that because that is the boiling temp of water.

When I was a kid, I watched my mother and my grandmother can thousands of jars of green beans, potatoes and other veggies.  It's what our family has always done.  It's what people did less than 100 years ago before grocery stores popped up on every wide spot in the road and science stepped in with big agriculture for profits at the expense of our overall health.

I still say my grandmother made the best peach preserves I've ever tasted.  I could have eaten it by the spoonful straight out of the jar.  It was SO good spread over toast with butter.