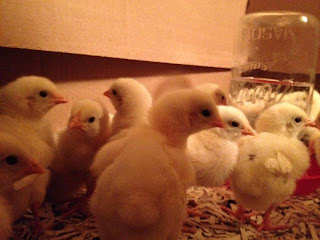 The meaties arrived safe and sound from Murry McMurry Hatchery this past Monday.  I'm guessing their hatch date was on Friday the 25th since they were mailed on the 26th.  I'm extremely pleased with the chicks so far!  They were peeping so loud that I heard them when I walked in the door at the post office.  Not something they are used to hearing, I'm sure.

They included a bonus chick, which I knew about before hand.  This little guy is not a meatie but I'm not sure exactly what it is yet.  I guess we will find out in a few weeks.  We also have no idea if little bonus is going to crow or not.  The kids and I are keeping our fingers crossed that it is a hen.  I didn't think about it before hand but I can't have another rooster around here because Zeus will NOT have it unless the chick is turned into a capon.  Taylor has officially named the bonus chick Goldilocks, Goldie for short.

Right now they are all cute, yellow and fuzzy.  Of course that won't last long.  If you remember a while back we talked about the chicken stink eye and how the Cornish Cross chicken has perfected the art of giving it.  D-Day for these guys can be anywhere from the weekend of March 30th to the weekend of  April 13th (depending on what group they are in and whether they are hens or roosters) so don't be surprised to see me start bitching about them, probably about the end of February.  :)

Here's a closer look at the group:

Next weekend these guys will be moving from the dining room (so I can start the remodel back up in there) to a larger brooder in the garage.  I know I said no chickens in the house but when they arrived it was obvious that they would not tolerate any cold at all because they were so little.  Next weekend is also when the live streaming will begin on our other site dedicated to raising chickens.  I'm waiting on the ethernet cord to come from Amazon and we'll be up and running!  Anyone will be able to check into the live feed on these guys 24 hours a day, 7 days a week.

In other chicken news, Dumpling is finally coming out of molt and a new set of feathers are starting to cover her back.  Zeus is also coming out of molt.  He looks like he was caught up in someone's weed whacker.  The others didn't really go full blown with their molt.  They retained the majority of their feathers.  I still can't get over how a species of animal will drop their insulation during the coldest time of the year.

The number of eggs has went down.  It appears that they are each only laying every other day.  That's OK because that's what chickens naturally do.  I have chosen not to put a light or anything else in the coop because I want them to be completely as nature intended them to be.

Their treat today was apples.  Kiev and Zeus are apparently fiends for apples and their feed when I drop it on the ground.


The low tomorrow is 6 freakin' degrees with a wind chill of below zero.  Zeus is going to hate me for it but I'll be closing up the coop tomorrow evening when I get home and putting more straw in front of the door to insulate it against the cold.  Last time I did that, he was NOT happy when I went out to check on them.

Anyway, I think that's enough of my chicken rambles for today.  Time off work doesn't mean there's no work to be done.  At all.  EVER.  : /