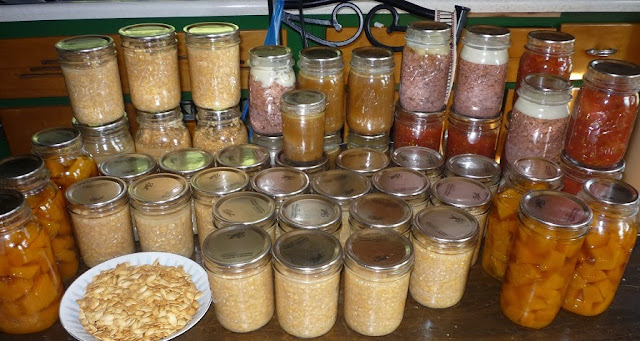 Somehow the thought entered my mind that it would be a great idea to can a bunch of stuff all at the same time.  It's that time of year but good grief.  In the middle of it all, I started to wonder how the heck my mother and grandmother did this in such large volumes.

Granted, I don't can the same exact things that they did.  Corn and meat was always frozen and I don't remember seeing either one of them making beef or chicken stock (I could be wrong on that though) or canning it.

In the past few days, I have torn apart two sugar pumpkins, shucked a bushel of corn (Sweets helped with that one), picked and chopped 10 pounds of tomatoes, made real beef stock (2 day process) and cooked five pounds of hamburger.  All for canning. 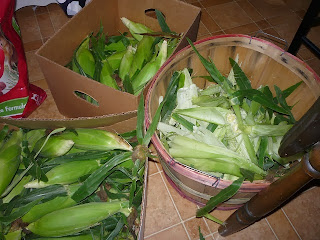 The corn took up almost an entire day.  Did you know that there are approximately 60 ears of corn in a bushel?  I have already put a few dozen into the freezer as corn on the cob and since freezer space is limited, the only choice for this bunch was canning.  I love canning things but I am not a member of the "I love canning corn" group at all.  Once a year is sufficient which means I have to go big to get it all over with. 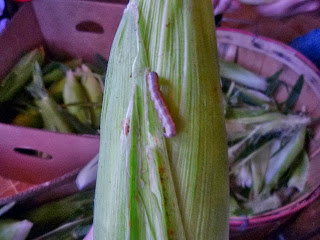 By the way... this tells me that the corn is not BT corn.  We saw a few of these guys in our corn this year and honestly, as long as they don't become a huge problem, I welcome them because they tell me that the seed is clean of the excess amount of BT toxin and I won't get sick from eating it.  Most sweetcorn on the market is not BT corn so "they" say.

To can corn you have to shuck it, blanch the ears for 3 minutes, cut it off the cob (all 60ish ears) and then cook it for 5 minutes before it even hits a canning jar.  Corn kernels expand as they are cooked so it's important to get the expansion out of the way as much as possible before dropping them into a pressure canner to cook it at a high temp.  Jars can blow up if you try to can it raw so I'm not even attempting raw pack on corn... ever. 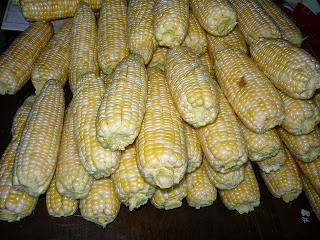 The bushel gave me 25 pints and 3 quarts of corn.  Combined with the corn on the cob that I have frozen, this should last us until I have to do it again next fall... and I'm not looking forward to doing this again next fall.  :) 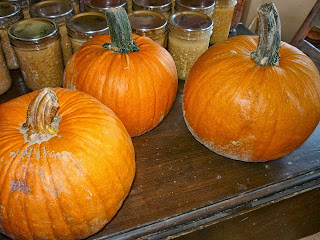 The 2nd most annoying thing to can in the world is pumpkin.  Why would I can pumpkin when I can just buy a can at the store?  It's simple... I know exactly what's in the jar and there's nothing but pumpkin chunks and water in those jars.  I still have 3 more sugar pumpkins because I only canned two.  I ended up with over three cups of seeds that I roasted this morning.  Those pumpkins were loaded with seeds.

To can pumpkin, you have to cut it in half, scoop out the guts, cut it into strips, remove the peel then cut it into 1 inch pieces.  (Cutting through a sugar pumpkin is about as easy as what I imagine trying to cut through a moose antler would be.)  Boil the chunks for 5 minutes then pack it into jars and process it.  Sounds so much faster than it actually is!  It cracked me up when Sweets came into the kitchen and informed me that the house smelled like pumpkin pie.

I ended up canning 5 quarts and 1, 1 1/2 pint jar of pumpkin from those two sugar pumpkins.  The pies, soups, breads and muffins from that canned pumpkin are going to be fantastic this winter.  I haven't decided if I am going to put the other three into storage for chicken treats this winter or if I will eventually get around to canning them as well.

Sweets didn't understand why I can hamburger.  The answer is pretty simple.  I do it because it makes my life easier.  I have 6 pint jars of cooked hamburger that can be used anytime for almost anything.  If I need to make anything with crumbled hamburger, I don't have to wait for the hamburger to cook or dirty a pan in the process.  One pan, 30 minutes to cook 5 pounds, put it in the jars and process it.  That 30 minutes to prepare the jars saves me a LOT of time and dishes when I need to use it. 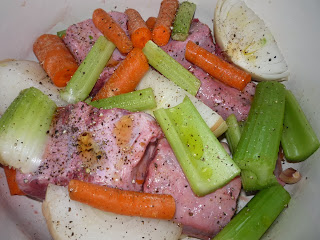 Finally, the beef stock.  Whenever I make beef stock it ends up being a two day process.  It's the real thing and makes excellent gravy.  First I roast the oxtail with vegetables and seasoning in the oven for a few hours.  Remove those veggies and replace them with fresh.  Keeping it in the roasting pan, I add water and cook on the top of the stove for a minimum of three hours.  Then it is cooled and put into the fridge overnight.  The next day the fat that has risen to the top is skimmed off and the veggies and oxtail are removed and all that is left is a nice, dark, hearty beef stock.

I did condensed this time which means that I can double the amount by simply adding water when I go to use it and it will not lose any flavor.  Since we don't eat canned or packaged gravy anymore and Sweets is a mashed potato fanatic, I had to do something to make gravy easier and canning concentrated beef stock is my answer to the problem.  I could also use it for stew or soup if I want.  To us it is time well spent because once again, we know what is in the jar.

It takes time to put all of that stuff together.  Why do I do it?  I do it because I want to know exactly what we are eating and where it comes from.  I have a funny feeling that our favorite winter time meal is going to be chicken with corn and green beans.  The garden gave us plenty of green beans this year too that have been safely canned and are all sitting in our pantry.

Yes, the chickens got their share too.  I think they are becoming annoyed by the amount of pumpkin guts and corn cobs/leaves they have been getting so far this week.  Zeus just stands there and stares at it instead of jumping right in like he usually does.  Poor spoiled rooster. 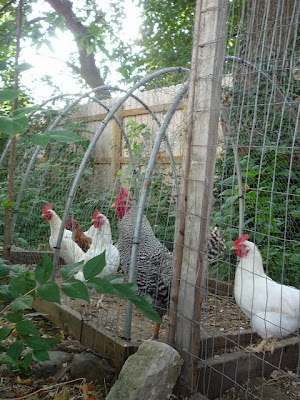 If you are wondering how the meaties are doing, you can follow their progress on growingchickens.com.