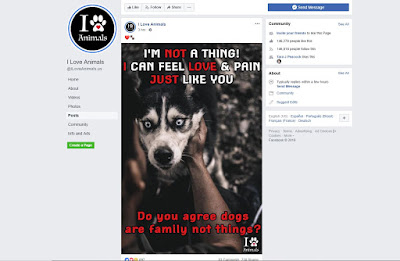 Some people don't know this, but both of my dogs are rescues from REALLY bad situations that sometimes make me question humanity.

Sophie was rescued over 13 years ago.  She was found with a broken chain around her neck in a field in New Castle, IN.  She weighed 19 pounds when they found her.  In case you don't know, a full grown female Siberian Husky should weigh between 45 and 55 pounds.  I've always wanted to tell her previous owner(s) what a piece of human garbage he/she is.  Who does this to their dog?

Indy's Home for Huskies took her in from Animal Control.  I found her on PetFinder.com and after a couple of weeks, she came home with me.  At that point she had gained 10 pounds and had found her husky attitude.  It was left up to me to get her to gain 20 more pounds and it took a year to get her there.

It really was a difficult first year with her because she was so sick from being starved as severely as she was.  The vet bills were a regular occurrence along with cleaning up massive, gross messes that she couldn't control.  As time has gone on, the messes are few and far between and the vet bills now consist of her yearly checkup and shots.

I promised her that she would NEVER be hit again, that she'd never be starved and I'd love her for the rest of her life.  I've kept that promise and I now have a 15 year old Siberian Husky that is still doing well despite hip problems setting in that a lot of older dogs have to deal with.  She's still not a fan of strangers but then again, I can't blame her after everything that she went through her first 2 years of life.

I'll never forget when the vet told me that she won't live as long as most Sibes do because of the organ damage that was caused from her starvation.  She's proved him wrong by about 7 years so far, but I wouldn't expect anything different from her.  She's just that bull headed and I love her for it.

Who forgets to feed their dog?  Starving a dog like that or any animal is not an accident.

Spudward's story... Fast forward to July 4th weekend, 2011.  I'm at a flea market.  A girl is carrying around a puppy going from booth space to booth space.  She gets to me and tells me that they have sold all of his brothers and sisters and if they don't find someone to take him that they are going to put him into a burlap bag and toss him into the lake.  I knew she was serious because of the area that I was in.  Animal abuse is rampant there and no one thinks anything about it.  Unwanted puppies are tossed into ravines and shot on a regular basis and people talk about it like you or I would talk about a recent shopping trip or vacation.  To them it is no big deal but to me it's just disgusting and inhumane.

I didn't want another dog or to deal with a puppy, but I didn't want him to be senselessly killed either.  I told her that if she didn't find someone to take him to bring him back to me.  Of course a few minutes later, she was back and she handed him to me.  I should have just taken him the first time she approached me to save her the trouble of pretending to ask around a little longer.

His body language told me that his spirit was so broken.  Head down.  Skittish.  He smelled like pee.  He was white with a little bit of brown and was already sporting that awesome brown eye patch that will just melt your heart.  A roly poly puppy that I knew was going to take some work but I wasn't going to let him lose out on his chance at a good life that easily.  I took him home with the intent of giving him his confidence back, letting him be a puppy and then finding a new home for him with someone that would love him for the rest of his life.

His puppiness came out with a vengeance once he was given a chance, coaxed along and he thrived.  Sophie took to him pretty quickly and they became inseparable.

Turns out, he did find a new home.  My home.  I'm a foster failure and it's my one failure in life that I'm actually proud of.  He will have been here 8 years the first weekend in July.  The eye patch is starting to fade but his attitude and confidence haven't.

Both of my dogs are victims of severe human cruelty, but they are both living out their lives knowing that not all human beings are assholes.  Dogs have emotions and facial expressions.  They feel pain, fear, anger, abandonment and contentment among other emotions.  They have the ability to bond with other animals including humans.  Their loyalty to their human is unconditional no matter how much of a jerk that human is to them.

Sophie and Spudward have taught me many things but the one thing that I am most grateful for from them both is their unconditional love and trust that they have for me, even after what they have both been through.  They were both hurt so badly by humans.  I have too but I'm the one that doesn't trust people like they do.  I'm the one that doesn't open up like they do.  I'm the one that views humanity as being cruel to everything, including each other... when these two obviously don't.  They both gave ME a chance.  Something that I struggle with when it comes to people.  In their own ways, I think they are more of what humanity should be and where I fail.  They love unconditionally and are forgiving.

Sophie, Spudward and all dogs out there aren't "just a dog."  If you pay attention, you'll see it in your dog too.

I'm sure that Spudward doesn't remember Putnam County because of how young he was but I'm also sure that what he endured before arriving at that market was pretty bad because of the condition that he was in emotionally and physically when he was handed to me.  Today his personality is HUGE which is great... most of the time.  But he grew into a dog that has seizures and the vet has no clue why.  It could be something as heartbreaking as some asshole kicking him in the head before I got him.  Or it could be irresponsible inbreeding.  No matter what the cause, thankfully he hasn't had one that I know of in about a year so hopefully those are over with.

I do believe that Sophie remembers her abuse and starvation, but the only side effect that she seems to carry is her slight dislike of strangers.  Especially men.  She's a pretty good judge of people though and I take her recommendations very seriously.  She'll approach people that she genuinely likes and avoid you if she doesn't.  One thing that she will do that is NOT a Husky trait is that if someone gets too close to me, she will nip or try to move them away.  Whether she likes you or not.

None the less, they are both awesome and I'm glad that I've been entrusted as their caretaker.  I plan on spoiling them every chance I get without even thinking twice about it.  I think they both have earned it and then some.