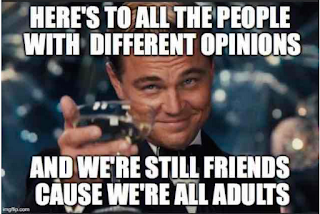 I normally don’t talk about politics or religion in public because of how much it is a part of who we are.  BUT, religion has been on my mind today and since this is “writing what’s on your mind homework,” we are going to talk about it.


I'm going to clear the air right off the bat... I'm an atheist and have been for years now.  Don't get me wrong, I have nothing against people that are religious.  I strongly believe that religion has its place in some people's lives.. it's just not for me.

I was raised Protestant.  Went to church every Sunday morning and a lot of Wednesday nights.  My grandmother and mother made sure of it.  I don’t remember when I really stopped going but it was when I started soul searching because of things that happened and religion just didn't make sense to me.

Some things that I learned from my dad was to think for myself, don’t believe everything that you are told.  If I don’t understand, ask questions to get clarification.  He taught me to be a free thinker.  Use logic.  Always be open to learn something new because you never know as much as you think you do.  In essence, question everything.

He was brought up Baptist.  He didn’t talk about religion very often at all.  When I think back now, I definitely understand why.

I started asking questions.  Originally I'd ask my grandmother and it really didn't go over well.  I learned really quick that we weren't supposed to question, we were just supposed to believe.  It didn't make any sense to me.

A few years ago I went to the church that I grew up in.  I had planned on re-establishing my membership there only to be told that I'd have to take bible classes first before I could do that even though I had went there before.  My how things have changed.  Churches and religion seem to have a habit of changing when it's convenient, lucrative and more accepting to society.  I can argue that point till the cows come home because I've studied it.

It didn't make any sense to me and since I already know what happens when you question anything with the church, I walked away.  I walked away because those classes made me question even more.  I crossed over to being Agnostic at that point and started searching for answers.

It also got me thinking... if what I was being taught before was wrong, what happens if you are being taught by someone who is teaching you wrong?  Does God really frown on musical instruments being used to sing his praises?  What happens to you if your life ends and the teacher was wrong?  Would I still be Christian if I were born in another country like India?  The short answer to that last question is no.  Your religion depends a lot on where you are born and what family you are born into.  I could have just as easily been born into a Catholic or Muslim family.  Would I still have been Protestant?  No.  How do you REALLY know.  What religion is the right one?  There are an estimated 4,200 religions around the globe so everyone has a 1 in 4,200 chance of picking the right one.

Don't get me wrong, I'm not a bleeding heart here.  Far from it.  I believe in helping anyone that truly needs it.  I believe in being kind to everyone, unless they are unkind to me and then they become fair game and I'm not nice.  Let people live their lives without judgement or persecution for their beliefs.  Hold people accountable for what they DO.  I'm definitely not the same person I was just 5 years ago.

Every time someone finds out that I'm an atheist, they turn their attention to trying to get me back to the church.  No.  Don't do that.  There is nothing that can be said that is going to change my mind to go back.  If I'm wrong, I'll live with the consequences but I don't think I am.

So many horrible abuses have been done under the shadow of religion and I don't support it.  I'm ambivalent to religion.  I don't care what someone's religion is.  I care about what kind of person they are and what kind of heart they have.

My father was a good man and he didn't find that in religion.  He found it in his heart.  I want to be like my father.

Many people that have experienced traumas like I have take this view.  Not all, but many so it shouldn't be a surprise to many people that I have embraced becoming an atheist.

That's all for today.  You don't have to agree with me.  In fact I don't plan on anyone saying "oh yeah, me too" on this.  It's just me getting my thoughts sorted out.  Nothing more.  Nothing less.