The Beauty of Science- Icicles 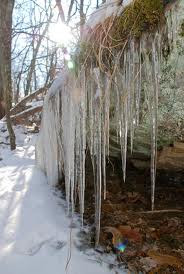 Winter can be a bitch and right now she's parked in my yard and the yards of everyone else living here in Indy.  I usually love winter.  Heck, I usually love all the seasons that we are privileged enough to experience.  The changing of the seasons is one of my simple pleasures.  It provides a bit of variety in a world that can sometimes be filled with sameness in everything.

The aftermath of an ice storm can be a world transformed into something beautiful that you do not see very often at all.  A landscape covered in glistening ice with icicles hanging from places that you would never dream of.  Houses, cars, buildings and lawns are covered, crunchy and just beautiful.  Jack Frost has been here, done his thing and headed up to Nova Scotia from what I hear from a friend on Twitter.  Be careful up there my friends because this storm is an ugly one.

So I'm standing in the back yard with the dog waiting for her to "do her thing" and the night air has a sense of electricity in it.  Water is a conductor for electricity but I'm not sure if that is the reason why the air felt and smelled like that.  But anyway, I could hear popping noises mixed in with the whistling of the wind.  A lot of popping noise.  The combination of an inch of ice breaking up on the power lines, tree branches and other vegetation around the yard.  It was a scene straight out of the Twilight Zone.  A bit disturbing but beautiful all at the same time.  The senses are alerted because if it isn't the norm, it could mean danger.

Icicles are a natural thing to see during an ice storm or when snow starts to melt.  They are beautiful and just like a snowflake, no two are ever exactly alike.  They have a tendency to form in some of the most interesting and crazy places.  We usually see them on our houses and sometimes intentionally mimic them with our Christmas lights during holiday time.  They are a natural part of a winter landscape and we do expect to see them. 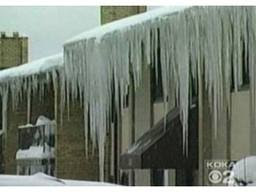 But, have you ever wondered exactly how they form, grow and why?  Well, unfortunately my cursed little brain that is always dying to be fed did and here's what I came up with:

Icicles are formed when melting snow, or ice, starts to drip off of a surface.  What I didn't know is that there is an actual mathematical equation to the formation of an icicle.  Obviously the shape of an icicle is very similar to the shape of the one next to it, but no two are ever exactly alike.  "The height is proportional to the radius to the four thirds."  Now that statement really doesn't make any sense to me, but this part does.

When the water is melting and starts its way down the icicle, it produces heat as it starts to freeze.  (Friction always creates some form of heat.)  We all know heat rises so this heat starts to rise up the side of the icicle.  The warm air becomes a "blanket" that is thicker at the top of the icicle than at the bottom.  Since this blanket of warm air is thicker at the top than the bottom, it causes the top to grow much slower than the tip.  And as a result, the icicle elongates itself by the bottom part growing much faster and the icicle gains in length.  That is also why an icicle always has a layer of water on it when you touch it.  The heat that the dripping water produces never allows it to completely freeze solid on the outside. 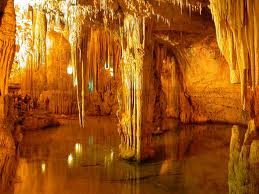 Funny thing is that icicles have a cousin in the stalactites that we see in caves.  Those large, limestone hanging deposits that can be absolutely huge sometimes.  Stalactites are formed much the same way as our friend the icicle.  I've always found them to be a bit creepy but then again, it could just be the cave environment in general.  It's always damp, filled with slimy animals and the echo factor makes it hard to determine where a sound originates from.  But even with the creepy factor, I'm still amazed when I see them.

So, there you have it.  A small science lesson for today.

I've always loved science.  It has always been one of my favorite subjects since I am just absolutely horrible at math... unless there are dollar signs involved.  :)

PS: Pat- How bad was it where you are?

PSS: Thanks guys for your notes on the last blog.  It was nice to read them and I do appreciate it!

Email ThisBlogThis!Share to TwitterShare to FacebookShare to Pinterest
Labels: nature