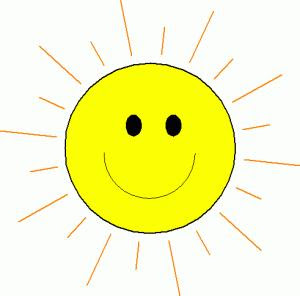 Bring on the sunshine!  My gosh it's going to be a beautiful day today!

I can't wait for summer.  Don't get me wrong, I love all of the seasons and that's one of the reasons I have opted to stay in Indiana.  It's a state that fully embraces all four seasons of the year.  But as time is going by and I'm getting older, I'm finding that I enjoy warmer weather and the sunshine a LOT more than the cold of winter.  Give me snow in a 70 degree day in December and I'd be happy.  Unfortunately that just isn't in the cards or possible in nature.  She can be so cruel sometimes.

On another subject... I swear if I don't stop sending text messages that were meant for Sweets to other people on accident... well, at least the good thing is that I don't send questionable or dirty ones to him.  I don't think my brother or any of my other friends that have received one of those would really understand WHY I'm asking them to pick up Dew on their way home or filling them in on what has happened today.  My favorite was when I accidentally sent a text to my brother about "his" $400 dentist bill and telling him that I thought it was extreme and he needed to man up and just take the needle instead of being knocked out.  My brother understands my total lack of paying attention and said to just not send any pillow talk.  He's so sweet!  LOL!

I'm blaming the phone and my utter lack of paying attention to who I texted last.  *sigh*  Freakin' iPhone and it's technology.  I did it AGAIN today and it was quite comical to say the least.

Yep.  I'm still a work in progress.  But then again, aren't we all?

Happy Saturday!  I'm off to do more writing today.