I'll try to keep this short and sweet but it's one of the most shocking things I've ever been asked by a stranger in my entire life. 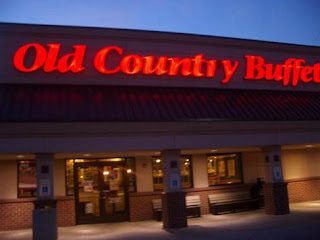 Sweets and I argue just like any other married couple out there and sometimes just don't see eye to eye on certain things.  In fact, we actually had to learn HOW to argue our points and compromise with each other in the beginning.  That's the normality of this little scenario and we compromised by going out to eat of all things in the world for this little story.
Now I'm not a big fan of buffets but there's one that we found that doesn't gross me out, the food is decent (for buffet food) and the place is pretty clean so I don't have an issue with eating there.  We usually time it for when they aren't busy but missed it by an hour or two on this particular evening so they were still pretty busy when we got there. 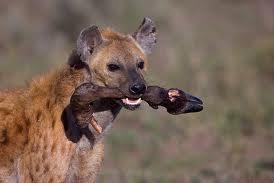 People crack me UP at the buffet.  THEY AREN'T GOING TO RUN OUT OF FOOD PEOPLE.  You don't have to fight for the last freakin' chicken wing in the steam pan because someone will be along in a minute or two with more that are actually still HOT.  I swear it's like being in the middle of a pack of hyenas that have just taken over a wildebeest carcass from a lion.  I can't help but laugh every time we go and hear the narration in my head as I watch these hyenaish people go from steam table to steam table like it's the last chance they have at crab legs, cheesecake and roast beef.

Standing off to the side a bit until the meat section had cleared out, I hear a voice that catches my attention say "I'll off yours if you off mine." 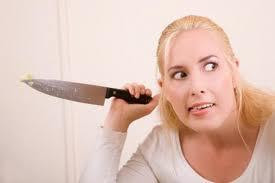 I look over and there's a strange woman standing there talking to me, explaining how she will "off my husband" if I "off hers."  WTF?  Are you serious?  I told her sorry, I actually like my husband and really don't want him dead.  So then she tells me that's a shame and tells me that she'll pay me to "do her's in."  Come on! All I want is a piece of ham so I can go sit down and eat and now I'm talking to some crazy lunatic that is actually trying to talk me into killing her husband.  She's a persistent little thing and if I were him, I wouldn't be falling asleep around that crazy bitch anytime soon!  Wow.

I finally get away from her (I think she works there), get my ham and head over to our table where Sweets had already dove into his steak and shrimp.  I'm laughing as I tell him what happened and am able to point her out to him because she's hovering around the desserts which is the only stretch of the buffet that can be seen from our seats.  Personally I don't think he was as amused as I was because now that I think about it, he didn't even crack a smile when I told him about it.

Only in my world does crazy crap like this happen, I swear!  LOL!

I sure hope she wasn't serious but for some odd reason, I'm leaning toward the idea that she was.

Geesh!  Sorry Sweets but if I EVER get an undying urge to kill you and try to make a deal with a random stranger to do it, I PROMISE to see a divorce lawyer first.  And I hope you would extend the same courtesy to me!

Curiosity is killing me though.  I've had people in the past ask me to please tell them if they ever piss me off because I do admit I'm able to get a lot of things done when I'm angry enough and feel like I've been seriously wronged but I've never had a stranger approach me like that before.  Now it makes me wonder... do I put off a psycho bitch vibe to others?  Hmmm....  Yikes!