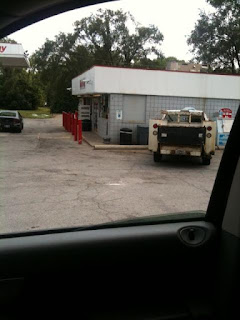 People who park sideways taking up more than one parking spot (especially when parking is limited) peeve the shit out me.  People who park in the handicap spot who aren't handicapped or have a sticker/placard in their car peeve the shit out of me.  So you can imagine my disdain when I zipped over to my local Speedway gas station to pick up a Mt. Dew and was greeted with this little scene.

Now this scene is actually common at this gas station and I'm not really sure why.  There are more parking spaces on the other side of the building but for some reason, able bodied individuals are drawn to the spot like a moth to a porch light at night.

Of course I parked in the space that was open next to our friend here and went into the store to get my Dew fix.  Low and behold, the driver of this vehicle wasn't browsing the store.  He wasn't waiting in line to pay.  He was working on one of their drink machines. 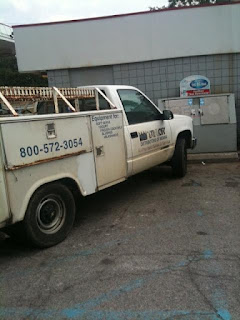 Now, I'm not really a Parking Nazi but COME ON dude!  That's just dickery and there is absolutely NO excuse that can justify it.  I've seen worse but never from someone who was there to work because most companies obviously frown on this kind of thing because they don't want anyone to think that they are insensitive to the handicapped.

Handicap parking spots are usually strategically placed by businesses so the people that don't have the ability to walk can hopefully have an easier time making their way in and out of that business.  They aren't there for a quick run in and out because the driver is too lazy to walk an extra 20 or so steps to make their way into a business.  I don't know about your area, but parking in a handicap space without the proper sticker, placard or license plate can earn you a ticket around here.  They are there for a purpose and aren't reserved spaces for me, you or any other able bodied person.

Maybe it's the combination of the cockeyed park job with the handicap spot that went right through me on this one because as you know, I normally don't post this kind of stuff.  But the driver would have to be completely blind and stupid to even attempt to say, "I didn't realize I was in the handicap spot."  I see blue paint and a sign right at eye level on the side of the building.  Anyone who parks in this spot that didn't know they were in a handicap spot needs to have their driving privilege reevaluated by the BMV because they probably shouldn't be driving if they can't see THAT.  My friends, this is an obvious display of dickery and an individual making a statement that the social rules of morality don't apply to them.

No, I didn't say anything at the time and I probably should have.  It may have made a better story, who knows.  But for some reason, the people in this particular area would be more inclined to give the middle finger and tell someone to go screw themselves than do the right thing.  Not all of course but chances were pretty good with this scenario.  Maybe that's why I didn't.  Maybe that's why I decided to be silent, take pictures and just rant about it here.  You can't always educate the morally ignorant individuals in this world, at least that's my opinion.

Rant over... until tomorrow anyway.