WARNING!  This post will leave you with the most extreme case of Puppy Love EVER!

This is what you call a puppy alarm clock.  I'll have to fill you in on how this little guy got into our house.  But first, listen to this:


That adorable little puppy is about 9 weeks old.  He's a Red Tick Hound mix and I picked him up last weekend while working selling my junk at Croy Creek.  All of his brothers and sisters were probably sold and he was the last one left.  Someone had to take him or he was going to be dumped.  He was so scared that I imagine that had something to do with the reason why no one took him.  So I did.

I called Sweets from Putnam County to tell him what was up with the puppy.  Loading the truck to come home was interesting... I thought he had gotten out and disappeared but something in the back seat moved and when I cleared a few things away, I was looking at puppy butt.  Yep, he had fallen asleep laying vertical, head down alongside my junk in the truck.  So he made the journey home with me back to Indianapolis.

The first day, he was very shy.  Had trouble with the steps out front and the "I don't know what to think about you" feeling was mutual between the puppy and Sophie.  Sophie is getting older (she's about 8 years old now) and is grouchy as a bear the majority of the time so I wasn't sure how she would react to the pup.

Day 1- She tolerated him.  But that's my Sophie and that's just how she is.

Puppy didn't go to the bathroom in the house at all.  In fact, I take them both outside every couple of hours and he gets to the grass for an immediate squat.  Impressive since he's so young!  The first night was interesting.  The thought was to put him in Sophie's cage in the basement for the night about 30 minutes before we went to bed so his yelping (all puppies do that) would hopefully be over and he'd be snoozing before we were.  I think his 2 hours of yelping and howling wore him out because he went right to sleep when I put him in that box next to the bed.

Day 2- Sophie warms up to him a bit and his personality starts to come out. 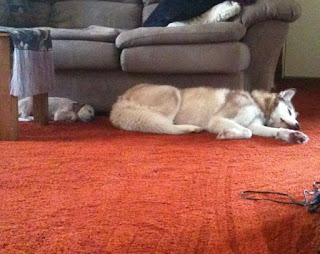 So on day 2, Sophie starts to realize that she has a bit of a shadow following her around.

He starts to bite at her tail and she doesn't freak out as badly when he invades her food bowl.  (That was UGLY the first time she caught him!)  She starts to play with him more but I think she's afraid she'll hurt him because he's so much smaller than she is.  And she has let him know it's her house.

We started occasionally putting a collar on him so he will start to get used to it and of course he hates it.  He walks on 3 legs trying to scratch at his neck the majority of the time he's wearing it.  I don't leave it on him all the time for a few reasons.  One, it's a pink collar and obviously not for a boy dog and two, it drives him freakin' crazy to wear it.  But it is kinda funny to watch!

Last week when I was packing the stuff for Croy Creek, Sophie laid claim on a squeaky pig that I had put into a box to take out there.  I squeezed it before putting it away and she took it out of the box while I was in the bathroom.  I could hear it squeaking.  Now, Sophie doesn't play with toys very often.  She likes tennis balls A LOT but has never really shown interest in dog toys so I figured she must really like the pig, and she does.

So... when the puppy stole the pig from her, it created a little bit of "what the hell?" with her and she kept looking at me like "are you going to do something about this or not?"

So... the puppy woke me up at 2am this morning to go outside because he had to go to the bathroom. Then he woke me up again at 7am. It's day 3 so I took him and Sophie both to PetsMart earlier today to get a few things including a black collar for him, shampoo (he smells like a goat) and ear mite medicine for both of them as a preventive measure. Neither one of them liked it but they got it. 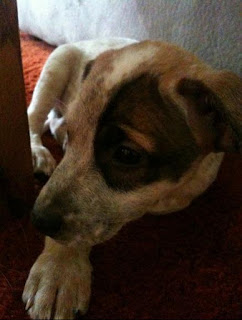 He's not a fan of car rides but he barked his head off in the cart going through the store. Everyone kept talking about how cute he is. And... he is. I don't plan on keeping him though because one dog is enough. But I'm really wanting to make sure he goes to an awesome home that will love him forever because he's a charmer, absolutely wonderful and actually a joy to be around.

Sweets keeps calling him Spud. I think his name should be Earl or Clyde or something along that line. LOL!

And yes, he does have that awesome puppy breath.  He licks your nose when you pick him up and has the cutest eye patch I've ever seen on a dog.  And always has the most serious look on his face. Like he's trying to figure it all out.  It's kinda adorable.

Happy Tuesday!  And all of the oooh's and awww's are completely on the house.  Welcome to the world of Puppy Love!

Email ThisBlogThis!Share to TwitterShare to FacebookShare to Pinterest
Labels: Spudward