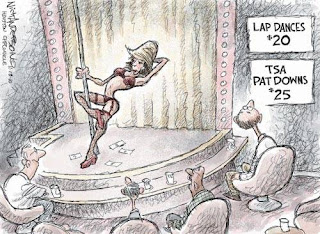 I usually try to stay away from posting anything about politics, religion and current events in the world unless there is something that just really jerks my chain and I feel the urge to voice my opinion on it.  This, my friends, is one of those occasions and I have to say that it is one of the MOST unbelievable examples of stupidity that I've ever heard of.

Now, I have a tendency to get extremely pissed off when I watch the news.  The logical solution to that problem would be to just NOT watch the news and in years past, I didn't.  If something big broke, I'd know because it would either show up in the timeline on Facebook or Twitter or I'd read it in the newspaper (yeah, I still like the newspaper).  Sweets has to watch the news every stinking evening.  It starts at 10pm with the knock off version of WISH TV on channel 8 then moves to the real thing on channel 7 at 11pm.  So it's possible that I'm exposed to two hours of local news every evening on subject matter that will eventually either put me on high blood pressure medication or cause me to stroke out at some point.

Anyway, there has been another development with the wonderful TSA.  That wonderful agency that is responsible for keeping terrorists off our airplanes and all of us safe while we are in the air.  And yes you are probably reading a bit of disdain in that foregoing sentence because in my personal opinion, they are the biggest freakin' joke in our travel system at the moment.  And I have good reason to feel that way. 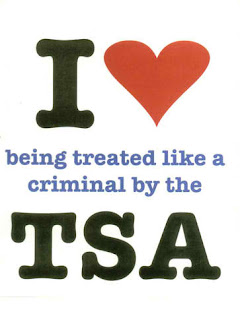 Hawaii, Los Angeles, Washington, DC, Tuscon Arizona, Chicago.  All places that I have had to fly to AFTER September 11th.  And EVERY TIME I have went through security, guess who has had to get into the body scan machine?  That's right.  Yours truly.  Not the 250 pound woman standing in front of me in the overcoat and baggy clothing.  Me.  Every stinking time.  I could walk through security in a fucking bikini (which I've threatened to do a couple of times) and still would not be surprised by the jackass pointing to that machine.  I have already decided the next time I fly somewhere and I don't care if it's January and 20 below outside, I'm at least wearing a tank top and shorts with flip flops.  It's just extremely frustrating.

There's a difference between doing your job to keep people safe and being on a power trip because the law gives you an excuse to be.  I used to be a stanch defender of the TSA and the things they do.  Saying that it was people's choices to fly and if you choose to fly, you choose to be scrutinized.  But this bullshit really takes the cake:

Now I don't know about you and of course none of us know what happened behind those closed doors but this was a bunch of bullshit.  She was flying alone, is 95 years old, confined to a wheelchair and in the final stages of Leukemia.  Yeah, I'd be scared as hell to ride in the same plane as this woman because you just know she's up to no good.  Who the hell thinks that making this woman take off her Depends and not letting her put on a new pair is a good idea?

I flew to Tuscon, Arizona in 2003.  While at the airport to come home, I was sitting outside the gate with the ex waiting for boarding when a black SUV pulled up and 4 Middle Eastern Men got out.  They hugged each other and said their goodbyes which resembled the same type of goodbye that you say when you will never see the other person again.  Then the two men walked up to the counter for Frontier Airlines (the same one that I was flying on and there was only 1 flight going out for the rest of the day and I was on it too) and checked in.  They had no baggage and one carry on each.  Needless to say, I was very apprehensive about getting on that plane but a few margaritas later, I had decided screw it.  When it's your time to go it's your time to go. 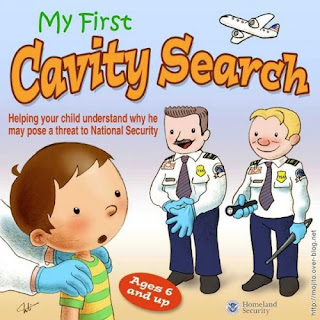 Obviously my fears were unfounded because I made it home.  But, I hated getting on that plane to come home.  Why?  Because history had taught me that those were the type of people that spelled out danger on an airplane.  If there had been a string of 95 year old women smuggling bombs onto airplanes in their depends, I could understand the TSA's reaction to that woman.  And before someone gives me the "Lanie, you're racist" BS, let me ask you this... what type of person committs the majority of terrorist acts in our world?  Because it sure as fuck isn't 5' 3" 120 pound white women with long brown hair and brown eyes.  And it sure as hell isn't 95 year old terminally ill women or 6 year old children.  I know it's wrong to profile but it's also wrong to put me into that damn machine every time and it's also wrong to force a terminally ill old woman to go without her Depends.  And it's also wrong to touch a 6 year old child in places that their parents have taught them are "bad touch" areas.  It's just disgusting.

But why do they do it?  Is it really for our safety?  Or is this job comparable to any other low paying job that only attracts a certain type of person who will take their frustrations out on the next guy in line or likes to play games to tell his buddies the next Friday night when they are out bar hopping?  I don't know for sure.  But what I do know is that your safety on an airplane is dependent on an individual that makes a whopping $13.95 per hour.   Comparable to a grocery cashier, low level Administrative Assistant or Certified Nursing Assistant.  That's the person that is responsible for your safety when you fly.  It's a comforting feeling, isn't it? 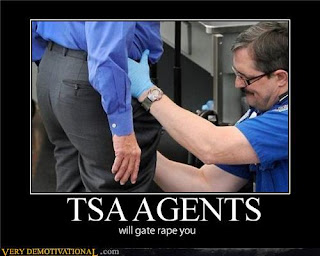 Now I'm not saying that they are all bad.  It's no different than any other profession out there.  And I do believe that sometimes people's desire for civil liberties can kill them because evil will always look for the weakest link as a place to strike.  Civil Liberties unfortunately can create those weak links.  As Americans, we have been spoiled to a fault and leave ourselves wide open for harm.  How quickly we forget and sometimes need to be reminded.

So take in the story of that 95 year old woman and your author here and take a gander at this:


They said he's not a terrorist.  Thank God for small favors.  What a joke and I hope those screeners are fired.

If there has ever been a bigger candidate for the worst "Oh Shit" in the past few years, I do believe the TSA is the winner, hands down.  If something isn't done to change this, it's not a question of who, what or how.  It's simply a question of when.

Ok, I'm off my soapbox for now.  Hope everyone is having a stellar weekend! :)  And, I really do mean that!