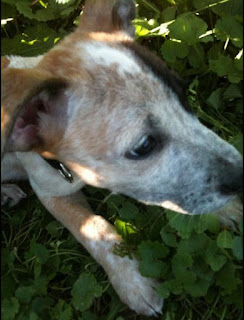 This morning Sweets and I were at Bargersville Flea Market to sell more junk.  Err, I mean stuff.  We took Spud with us and he spent almost the entire day sleeping under one of our chairs unless he was being wallowed by a child or cooed over by one of the random women who swore he was the cutest thing in the world.

Now Spud is that puppy that I brought home last weekend from Croy Creek.  Yeah, we found a home for him alright.  Ours.  Sophie loves him to death and he's been such a breath of new energy in the house that Sweets and I decided to keep him around.  Puppies can do that.  Reek a good kind of havoc that can do things like change your wake up time every day from 9am to 7am.  It adds a few more hours to the day to get things done. Havoc but in a good way.

I confess I occasionally call him Spudward because I think it's a cute little nickname for him.  Sweets doesn't seem to like that too much but I don't really think Spud could care less.  He's just happy to have his hugs, kisses and kibble twice a day. 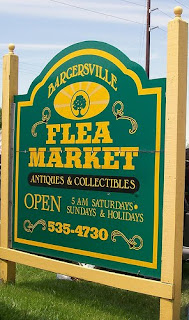 The market was OK today with a few surprises here and there.  We were able to sell everything that I said I wanted to sell today.  Especially "Herbie."  The 3ft. tall Christmas penguin that we have had for over a year.  We swore that the only reason that he hadn't blown out of the back of the truck was because he had been with us for so long that he felt like a part of the family.  I threatened to put him front and center with a sign attached to him that would say; "Please adopt me for $1.00."  The word "adoption" seems to be the trendy way to sell anything to do with animals now days.  Put your puppies up for sale for $50 and people won't even look at them.  Offer them up for adoption with a $50 adoption fee and see how quick they disappear.  It was the same philosophy with poor Herbie the Christmas penguin.  I left our area to run to the bathroom and came back to Sweets' smile and a "Guess What!?!"

Needless to say when we got home Lanie and Sweets were completely worn out.  It was hot out.  Not what I describe as Africa hot but it was definitely pushing the envelope on it.  Naps were in order and gladly taken then the truck was unloaded while Sophie watched from her laying spot and Spud ran up and down the driveway proudly carrying his latest find.  One of Sweets' socks that he pulled from the laundry in the basement.  I'm just thankful that it was a sock and not anyone's underpants... cause that would have been funny, if it had been someone else's puppy doing it. 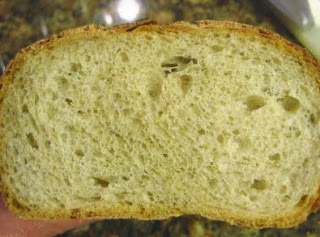 I spent a little bit of time deciding everything that I want to attempt to get done tomorrow.  Making fresh bread is top on the list.  My favorite bread recipe is SO simple to do that you'll be amazed.  If you are interested in it...

And that's all it is.  The old saying "keep it simple stupid" applies here.  You don't need milk, eggs or anything else.  Flour goes into the bowl.  Mix the yeast & salt in and add warm water (there's no set measurement on the water because how much you add will depend on the humidity in the air) until it forms a nice dough.  Knead it for about 10 minutes and let it rise for an hour.  Cut it in half and put each loaf (it makes 2) into buttered loaf pans and let it rise again for about 30 minutes.  Bake in a 350 degree oven for about 45ish minutes to an hour or until it's done.  It's a nice, heavier, very crusty bread with a fluffy center that is great for soup, french toast or anything else that you need a crusty bread for.  Sweets says it's yummy and I have to agree with him.

Who knows what else tomorrow will bring.  I'm sure there will be more puppy antics.  More projects completed because there is always something in the fire that needs to be done.  Hopefully there will be writing.  Hopefully Spud provides that 7am wake up serenade and hopefully the to do list will become just a little bit smaller.