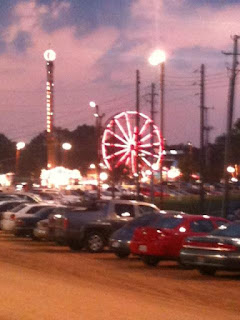 This past weekend, Sweets and I decided to take a trip over to the Indiana State Fair.  He has NEVER been to the Indiana State Fair so it was of the up most importance that we make the trip this year.  I know I make it sound like it takes forever to get there.  It really doesn't.  But with the traffic it felt like we were on a never ending journey across the country.

But the food is my weakness.

We didn't eat before we went because the plan is to go from booth to booth filling up on the wonderful, unhealthy junk that you can always find at a fair.  Elephant ears are my weakness.  I love them.  But standing in line at the first place we saw that offered them, I noticed something a little alarming.  Instead of brushing on that wonderful, melted butter before adding the cinnamon sugar, they were taking a squirt bottle of some whiteish colored goo and putting it on them before the cinnamon sugar.  No butter.  Just the white goo.

An alarm went off inside my brain.  WTF is THAT white goo?  What the hell happened to just plain ol' butter?  And why the HELL would ANYONE change a carnival staple like an elephant ear?  Are these people smoking crack behind their food booths? 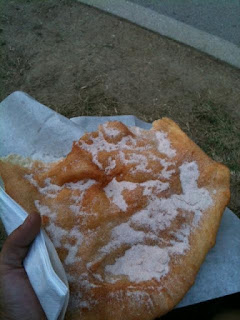 I asked the man at the window if they use butter on theirs and he told me no.  They use "this" and he showed me the squirt bottle that was filled with white goo.  By his use of the word "this," it gave me the impression that he wasn't even sure what the "this" was.  So I wrinkled up my nose in protest and told him thanks, but no thanks.  It took a few minutes of searching but Sweets and I finally found a food vendor who was just saying no to the white goo.  And it was good my friends.  Very good.

The next mission was strawberry shortcake.  I had the BEST strawberry shortcake ever there a couple of years ago.  It was actually on a biscuit.  The strawberries were dripping in their sugar syrup bath (not that fake ass strawberry gel goo that you get at Kroger or your local pancake house) and it was topped with REAL whipped cream.  Not the crap out of a can or that fake ass Cool Whip (I do like Cool Whip but it's nice to have the real thing too!).  We located the building and after the elephant ear incident, I described the strawberry shortcake I had a few years ago to make sure I was in the right place.  The guy told me they don't do the whipped cream anymore, now they are topped with soft serve ice cream but the rest is still the same.  It isn't homemade ice cream either.  It's out of a bag and put through the machine.  *sigh* 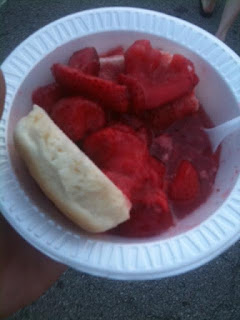 So, Sweets got the ice cream because I had them put it on the side.  He doesn't like strawberries, so I ate the strawberries and the biscuit.  It was yummy, but not quite as good as the first time.

We walked around.  And ate some more.  It was a fun evening!  But next year, I think we'll stick to the Marion County Fair.  Hopefully everything will be just like I remember.  After all, we are really only there for the food.


PS:  You can't go to the fair without playing at least one game (I need to teach Sweets how to use my phone too!)...