Sophie, Spudward and the Last Flea Market of the Season... 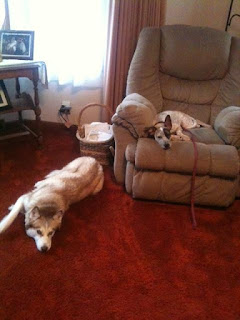 Sophie and Spudward both have certain jobs that they do.  They perform certain functions besides just being cute, cuddly and shedding everywhere.  Kibble isn't cheap by any means so we all have an understanding that they earn it.

Sophie has been doing her job for me for almost 7 years.  She has it pretty easy.  Her jobs are to patrol the house at night and alert us if anything is off kilter (she's actually really good at that one!) and to help keep me warm if Sweets is out of town for some reason.  Prior to Sweets, it was her job all the time.  She also keeps the back yard clear of squirrels, cats and opossums.  Her current kill count on opossums is two that I'm aware of and it's possible that there is one mangled squirrel running around out there somewhere.  She does her job pretty well. 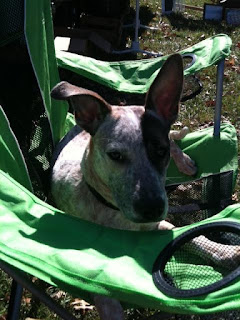 Spudward is still learning what his jobs will be.  He's still a baby at only 6 months old so he's still trying to figure it out.  One of his main jobs will be to accompany me to the flea markets, especially Croy Creek.  I did the first overnight with him this past weekend and have to say, when he wasn't being a puppy he was really good at his job.

In order to be successful at Croy Creek, you have to spend the night.  That's the part that kinda sucks... well, actually it really sucks but the main purpose of spending the night is to be able to hold your spot because it fills up quickly each weekend.  It's camping and Lanie isn't big on camping at ALL.  I can do it when I need to but it's not something that I choose to do for fun.

It was cold this past weekend.  Like 40 degrees at night.  If we had not had the van, I probably would not have chosen to stay the night.  Spudward's job is to be a guard dog at night and even though he's still a puppy, he was really on it Saturday night.  Every time a twig snapped, he was at one of the windows of the van checking things out to see what was going on with a deep, kinda unnerving growl.  That's what he's supposed to do so he's learning that job perfectly without much guidance from me. 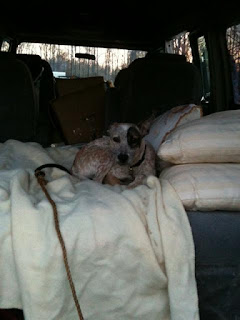 There are a lot of dogs at Croy Creek and it's imperative that Spudward learn to ignore them unless any of them become a threat.  This is where the pistachios come into play.  Whenever another dog would walk by, Spudward would go insanely crazy and start acting like an idiot.  It took a couple of hours but he learned that if he just calmly watched the other dog go buy, there was a pistachio in it for him.  Idiot= nothing.  Calm= his favorite treat.  He learns quickly.  :)

The weekend was really a lot of fun but majorly uneventful.  Spudward and I slept in the van for the first time in this chilly, 40 degree Indiana fall weather.  It wasn't too bad after I grabbed my down filled coat, it just feels odd sleeping in a coat with the hood up and I don't recommend it at all.  I came to the conclusion that Spudward and I could never be homeless because we wouldn't be able to take trying to sleep in cold weather.  Even though the van does sleep comfortably otherwise.  Maybe we are both pansies, but I'm going to figure out how to rig an electric blanket for these fall trips next year. 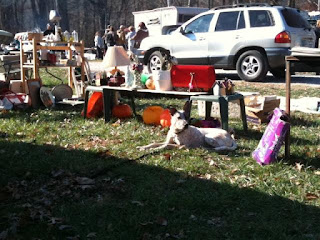 We made some bennies, saw some of the people that we had gotten to know over the course of the year and told them that we will see them again next year.  And we will because it's just too much fun not to.

Spudward is the perfect flea market dog.  He just looks like he belongs there mixed in with all the stuff.  Of course he does though because Croy Creek is where he came from.  Nobody wanted him back then but today, people can't wait to pet him and talk to him when they see him.  He thinks that the only reason people come out there is to see him.  It's a bit of a confidence booster for him which is important for what his job is.  He just somehow knows who is supposed to be there and who isn't.  I think he'll do his job quite well and be even better at it next season.

We did well with Croy Creek this past year even though we sat out for a couple of months because of the rainy weather.  Next year, since we purchased the van, the weather won't be quite as important to us because nothing will be destroyed from the rain.  I know what sells out there now compared to what doesn't so I know what to stock up on this coming season.  Next year will be even better than this one and I have five months to get it ready to go again.  It may sound like we have a lot of time but in reality, we don't. 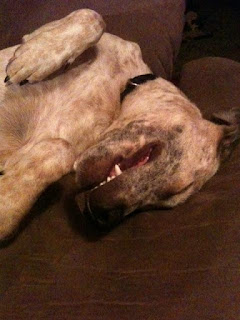 Here's to collecting our stuff all winter long to start it up again in April 2012.  I'm already excited.  Spudward would be too if he was intelligent enough to know what's going on.  Sophie could care less.  She's not the flea market type because she literally hates everyone except for me, Sweets and the kids.  She's a punk, but she's got good reason to be.  Spudward loves it.  It wears him out and he sleeps a lot when we get home.  *sigh* Now that's a look that either scares the hell out of you or makes you let out an "Awww!  How cute!"