So... I got my girls today.  When I got to Tractor Supply, their selection was so so.  I wanted to get chicks that were older than just a day old and they also had some older, 10ish day old chicks on sale.  I was a bit surprised by that.  A sale on chicks?  Ok.  I'll bite.

I asked the sales lady what breed they were and she told me that it was pot luck.  That actually sounded kinda fun so I ended up getting 3 Rhode Island Reds and 3 of the pot luck, there's no telling what breed you are getting, chicks.  And OMG!  They are SO cute!


The video is a conversation that Rosemary and Eunice were having earlier.  Everyone had just eaten and the group was laying down to take a nap.  Obviously since I don't speak chicken, I have no idea what they were discussing but it sounds pretty intense to me.  Rosemary is the reddish colored chick laying down on the far left and Eunice is the other one that's right above her.  Maybe they were discussing who was going to ultimately be the boss of the group or it could have been a conversation about food.  Who knows?

The chicks are a bit stressed today from being moved around.  I'm sure their lives so far haven't been a bed of roses but chicks are resilient and pretty tough little cookies.  I'm not going to handle them much today or introduce them to Sophie and Spudward just yet.  I think that needs to wait until tomorrow so their little hearts don't explode and they aren't stressed anymore than they already are.

I can't wait until they get bigger!  This is going to be SO much fun.  We should start getting eggs around October.  It's been a LONG time since I've had an egg that wasn't from the grocery store and I'm SO looking forward to that.

Well... that's all for today.  I have a chicken tractor to build today and I better get on it.  But, before I go, I'll leave you with a few pictures of Rosemary that will simply make you say "Awwwww!!!" 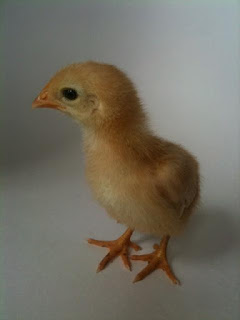 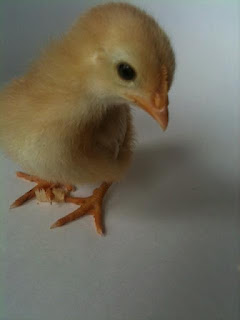 I know.  Isn't that just TOO CUTE?