I had a yard sale Thursday.  It was awesome but not what we are going to be talking about today.  Today I want to talk about honey bees.

Honey bees are a gardener's best friend.  They pollinate our plants and can literally make or break a garden.  If there ever comes a time where the honey bee disappears then a lot of the fruits and vegetables that we take for granted will skyrocket in price because they will have to be pollinated by hand in order to produce.  They will become harder to grow in our gardens and unless you know how to hand pollinate, good luck getting anything come harvest time.

I saw a report a couple of years ago that the honey bee has disappeared in Asia.  The pear farmers have had to resort to pollinating their trees by hand.  As a result, the price of pears has went up because now the farmers have to pay for more labor to get their fruit.

So... I was starting to pack up the yard sale for the day when I noticed something odd.  I walked around the corner of my house and yelled at my neighbor to come over and look at what I was seeing.  There were honey bees.  Everywhere!  All over the clothing that I had hanging on a stand in the driveway.  There was also this low rumble humming noise coming from the woods across the street.  We were a bit perplexed to say the least.

You can hear their humming in the video.  It was just so odd!


(Please excuse our language.  If you were seeing what we were seeing, you would have used a few colorful words too!)
This went on for about 30 minutes until they decided exactly where they were going to land.  On one of the tables that was in the front yard. 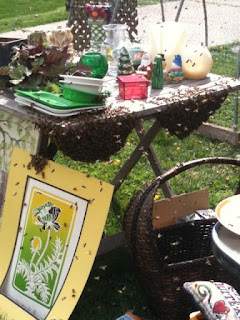 My neighbor across the street used to be a bee keeper so I ran over there with my phone and showed him a couple of photos of what was going on.  He came over and took a look and told us that the bees were moving and looking for a new hive.  The queen was buried inside that mound of bees and they were protecting her.  As long as we didn't swat at them or try to kill any of them, we were safe from being stung. 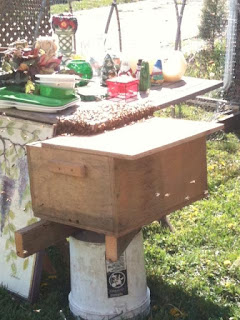 He went back to his house and picked up a hive box to bring it back.  Placing the box underneath the mound on the bottom of the table where the queen is will encourage the queen to go down into the box and the rest of the bees will follow.  It's being left there overnight that way the bees can go at their own pace.  Their new home will be right across the street which means that it is pretty much guaranteed that bees will be dancing in my garden this year. 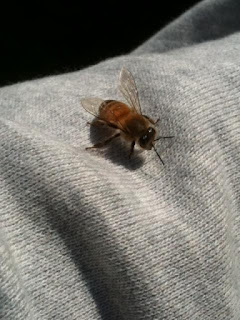 There is so much awesomeness in that.  Last year I think I might have seen 2 honey bees and the amount of food that I collected from the garden was mediocre to say the least and a great disappointment to say the most.  This year, I believe the garden will be MUCH better because of these little guys.
I'm 40 years old and have never seen anything like this bee swarm in my life.  Chances are, I'll never see one again.  Nature is such an interesting and beautiful thing.
On the chicken front, I picked up 5 meat chicks today.  Cornish Crosses.  They aren't as cute as my girls at all and in all actuality, they are kinda rude personality wise.  They smell funny and look kinda greasy.  I had read up on these chickens and almost everyone says the same thing so I expected it.  You won't see much of these guys because they'll be in the freezer around May 24th so they won't be here long. 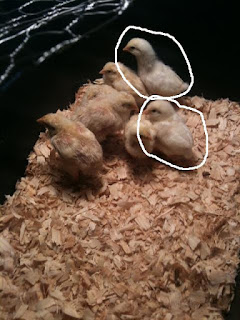 There are also 2 new girls in the bunch which will put my laying chicken number up to 7 or 8 (depending on whether Kiev is really a Kevin) which is sufficient.  The new girls are circled in the picture and are absolutely adorable!  It will be a few weeks before they are big enough to go in with Rosemary and the other girls.
Speaking of the other girls, they have been moved into a new, temporary home.  Their next move will be outside in about 3 weeks.  Their feathers are coming in and they are growing!  This new home gives them more room to stretch their wings, chase each other around and there's 3 roosting sticks to choose from.  They are already using the sticks. 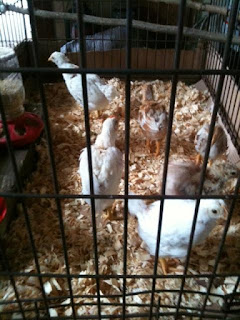 Their temporary home is a dog cage that I picked up for free on CraigsList.  It didn't have a tray in the bottom but that's OK.  A little bit of hillbilly engineering with cardboard and masking tape transformed the box into the perfect temporary habitat for the girls.  I can already tell that they are much happier with the added space.
NO MORE CHICKENS IN THE KITCHEN!  :) 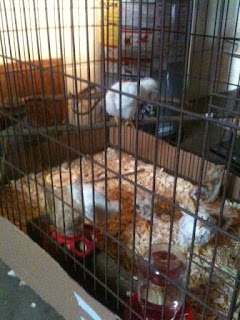 So the plan is to start on their permanent coop this week and get it in place.  When my laying hens are moved out into the coop, the meat birds will get transferred into this cage for the remainder of their time and the two new girls that I haven't named yet will go out to the coop with the bigger girls.  By then it will be warm enough for them even if they aren't completely feathered out.  I WILL be letting the meat guys out into the chicken tractor so they can scratch, but I've heard that these Cornish Cross birds are lazy and would rather just eat, poop and sleep so we'll see what happens.  I'm still going to test the theory just in case because I think it's the right thing to do.  After all, they are still chickens even if they are kinda grossing me out with their funky, greasy looking selves.
Happy Friday!
*hugs*
~Lanie