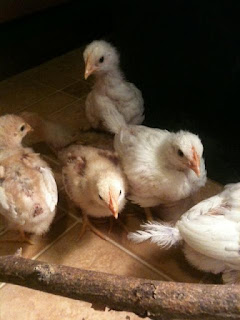 The girls didn't get any outside exercise yesterday.  I was too busy to take everyone outside for their usual bug hunting and scratching in the dirt.  Yes, I felt guilty.  So I put Sophie and Spudward up for a few minutes and figured I'd let the "girls" run around on the kitchen floor since I'm sweeping & mopping tonight.

For the most part, they stay together.  Kiev has a tendency to wander off most of the time but is easily corralled back with the others.

One of the things I've noticed about the girls is that they are SO easily confused.  All you have to do to confuse a chicken is show them something new.  Even if it is something you think they should already instinctively know what it is.

For example, a stick.  Just a plain stick from a tree out in the yard. When I showed it to them, all six chickens stopped dead in their tracks and started chirping.

This reaction usually goes on for a few minutes until someone finally gets brave enough to check it out.  Once the first one has tried it, the rest follow suit and join in.

Rosemary, Marsala and Fricassee actually liked the stick.  They took turns sitting on it and looking at the others down on the floor.  Roosting almost came natural to them once they realized that there was no reason for fear.  They all have their wing feathers now and are learning to balance themselves.

As Dumpling, Rosemary and Eunice are getting bigger though, I'm becoming suspicious on whether or not the sales person at the place I bought them knew exactly what breed they are.  The feathers are coming in a bit light for the Rhode Island Red.  At this point I really don't think I care if they are or they aren't but I'm still hoping they are. 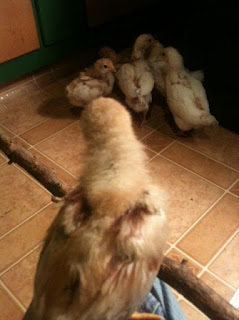 This is Rosemary sitting on my lap getting ready to step back onto the stick.  Her stick skills are quite exceptional for a 9 day old chick.  She has great balance and has the whole thing down to a science already.

Obviously the others are jealous of Rosemary's roosting skill at such an early age.  They were all huddling together in a circle.  Occasionally looking back at her and chirping amongst themselves.  I wonder if this is the kind of behavior that we humans call "gossiping like a bunch of old hens?"

I know you aren't supposed to have favorites with any pets but I think everyone who has them has that one that just sticks out in their mind.  For me, that would have to be Rosemary.  She's still the smallest one in the group and the one that actually gives me that sideways, one eye look when I walk up to their cage.

Yep, she's hands down my favorite.  I feel a little guilty but I'm sure I'll get over it.

These chickens are really cracking me up.