I've come to the conclusion that chickens create drama.  It must be part of their job.

There appears to be a rash of butt pecking going on in my flock of chickens.  I don't see the logic behind why these stupid little creatures would do that but hey, I'm not a chicken.  After losing Eunice to one episode of gang pecking and having to put Kiev into medical solitary confinement when they started in on his rear end, I decided to take the ring leader out too.  Marsala.

Since Marsala has been out of the group, there is a calmness present that hasn't been there before.  Even dentally she is the instigator of the butt peck.  She is (or was) the dominant hen which leads me to believe that she rules with an "or else" type of attitude.  Taking her out will cause her to lose her place.  When I put her back in next week, she'll start at the bottom of the pecking order.

I took this opportunity to put Curry and Piccata back into the flock now that Marsala has been removed.  Fricassee is trying to take Marsala's spot and I think so far she has been successful.  The funny thing about it that when Fricassee tries to square off with Curry, Curry is starting to square off right back at her.  Curry is still smaller than the older birds but I think she's just tired of the crap and is standing her ground.  Fricassee inevitably walks away and the altercation is over.  With no butt pecking involved.  The change in the flock has been an interesting one to say the least.

Kiev's rear end is looking much better since he's been out of the flock for a few days so I decided to put him back in with them, minus Marsala.  Partially because it was an inconvenience to have so many chicken cages but mostly because his booty is almost healed up.  It created a bit of tension at first but once again, all is right in the world of chickens.  At least until Marsala goes back into the group.

In the world of meaties, it's looking pretty good.  I took a break from writing today and decided to weigh them in since "d" day for them is in 29 days.  The 3 heavyweight roosters weighed in from 3 pounds to 3 1/2 +pounds each.  The 2 hen meaties were right at 2 1/2 pounds each.  Not bad since there is a month to go so I guess I can plan on them hopefully doubling their current weight.  I also have more time to fatten them up if I choose to.  They are eating a LOT and have recently been introduced to different foods that will hopefully make them taste better and be even more nutritional when they are finished off.

The only thing I think I would change with my next group of meaties is that they will NOT be allowed into the garage.  I'll have to make sure I have an outside area that can sustain day old chicks because these chickens are just NASTY.  They are serious pooping machines.  Then again, if I ate that much I'd probably be a pooping machine too.  I can also say that when it comes to chicken DRAMA, the meaties have zero.  Maybe it's because I'm letting them enjoy their lives instead of keeping them all cooped up fighting for space.  Tyson and Perdue could probably learn a lot from people who raise their own meat birds.

On the gardening front, everything is going well.  Hopefully the dirt will be ready next week for planting.  This coming week WILL be busy with another dirt turning in the herb garden, both turnings for the melon patch and the pumpkin patch, the rest of the raised beds being built and the dirt turning for planting the corn.  "Knee high by the 4th of July."  We'll see for sure.  Sometimes I wish I could split into two separate people temporarily so I could actually get more crap done around here.

Tonight is bread night.  I'm making a wonderful beer bread for my meals for the coming week.  I haven't bought bread at the grocery store in a while now and I'm actually feeling pretty good about it.  I have a surprise coming up if my experiment works.  Just what do you think I'll be able to capture and make with this? 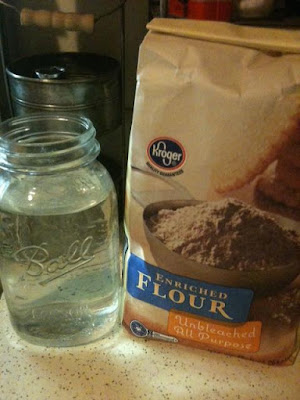 I'll give you a hint... I'm NOT making old fashioned wallpaper paste and this method is straight out of the 1800's.  OK, that was two hints but I'm betting no one knows the answer.  :)