It's been busy around here the past couple of weeks!  With garden planting time in full swing and coop construction going piratically non stop, there hasn't been much time for anything else.

Today was chicken moving day.  The coop has everything that it needs for housing the chickens so they are now enjoying their new home.  There is still some work to be done on it.  The eco roof needs the dirt and plants and there's some trim work that still needs finished but other than those minor details, the majority of what is now referred to as the "coop compound" is complete!

Total cost for the coop itself was approximately $45.00.  That's right.  I said $45.00.  All of the wood used with the exception of the strapping pieces were recycled fence and deck pieces.  I purchased all of the hinges ($8.00) and the tarp ($3.00) for the roof at Harbor Freight and the fence was actually the most expensive part, $30.00 at Tractor Supply.  The other $4.00 is what I'm guessing the screws and nails cost.  Some of the nails were actually pulled out of the wood and were able to be re-used. 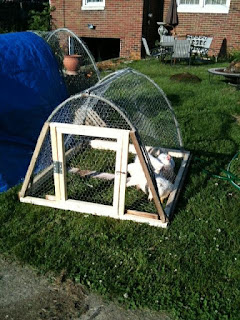 The meatie pen portion still needs the roof and the large sliding door.  Since my current meaties are at less than 2 weeks away from D-Day, they aren't going to be using the pen so it will be ready for the next batch this fall.  These guys are spending their last days in the market pen that I built a couple of days ago where they can enjoy the sunshine, the bugs and being everything chicken.  Whomever said that the Cornish Cross breed isn't "chicken like" needs their damn head examined.

Right now I have about $25.00 ish in the meatie pen and it was for 2x4's for the framing.  Since it will be a while before it is used, I'm hoping to come across enough wood to recycle and a piece of lattice work to finish it.

Both areas will need more fencing but for now, it works just fine.  I haven't even used 1/2 the fence that I bought for the coop and have a couple of posts left over from the fence so when I get time, I'll put up more fence.

Now I have temporarily attached their tractor pen to the coop until I get their permanent fencing up.  Needless to say, it looks a bit hillbilly but will work until the fencing is finished.  I'm going to need them to work the garden for me this fall after the plants are finished so that tractor pen will have to come off of the coop at some point this summer.

The chickens seem to be pleased with it so far.  I'm sure it will be a lot better for them than going from the garage to the tractor every day.  I know it will be a LOT easier on me because I won't have to mess with it anymore.  They don't mind being handled it's really just a bit of a pain in the booty and the only reason I now know how to carry three chickens at once.  Which is a skill that I don't think will benefit me anywhere except in my own back yard.

So... here's the new coop.  I'm pretty darn proud of it and thankful for the help that Justin and Taylor (and her friend Rosa that came out to help) to get it completed.  We did a pretty good job if you ask me!


I added one nesting box after I took the pictures so I'll know when it comes time to add the rest of them.  It's still a work in progress but it's getting there.