It's Official... The Chickens Think the Heat is BS 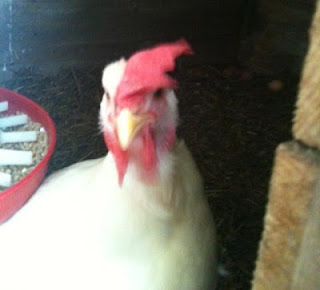 If you have never been given the stink eye by a chicken, that's what it looks like.  That's Kiev.  She was pretty pissed off when I took that picture.  I can understand why too because if I had to squeeze something out as large as an egg every day in 102 degree weather, I'd probably have that look on my face too.

Sophie and Spuddy have been over the heat for a while now but it has taken the chickens a little while longer to come around.  I would love to move them into the garage just because I'm that kind of bleeding heart person, but no.  I can't do that.  Zeus is enjoying the air conditioned quarters of the garage at the moment and it's the hens fault.

Oh... I didn't tell you what my evil pack of hens did to my Zeusie.  My nephew was at the house with my brother and told me that the hens were pecking at Zeus and he had blood on him.  When we walked back there, the bitches had pecked the heck out of his waddle.  I can't be sure why they did it because I don't speak chicken but I wonder if it had anything to do with his... *ahem* "lust for life?"  That is the only thing that I can think of that would cause them to turn on him like that.  Odd thing was that he wasn't doing anything to try and stop them.  When I was finally able to get him out of the run and up to the house, this is what we were dealing with: 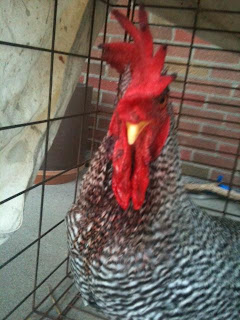 It was touch and go for the first couple of days and I honestly didn't know if I'd loose my rooster.  Thank goodness he's out of the woods now and just needs time for everything to heal up.  I felt so horrible for him.  His crying was unbelievable:


That noise is actually him crying.  It is one of the oddest sounds I've ever heard.  That was the day after the attack.  It's possible that I may have to remove part of his waddle because it's dead tissue.  Chickens can be assholes at times, I swear.

That chicken coop is a den of insanity and the hens all need a dose of Prozac.  I know that the heat has got to be getting to them.  I can tell when I go back to check on them because they are walking around holding their wings out for ventilation and doing a little panting.  I'm contemplating making a screen type door out of fencing for the coop door to give them a little more air flow when it is hot like this.  Another thing to do, great!  I eat that shit for breakfast.  It only took me a week of going outside and walking right past the tomato cage that was blown over in the storm last week to finally steak it upright.  They'll probably get the screen door sometime this fall.  :)

Anyway... if you have never seen a chicken in 100 degree weather in the dead of summer, this is what it looks like...

I'm sure you could have went your entire life without seeing that.