The Best French Toast EVER...


That's French Toast and strawberries.  It was my lunch today.  It's not just any French Toast either, it's gourmet shit.  For starters, I made the bread.  If you don't know how to make bread, you must have missed my post about how to make it a while back so go read it and come back.

**THIS RECIPE WILL NOT WORK WITH THIN, WONDERBREAD LIKE STORE BOUGHT BREAD.**

At the least you'll have to use texas toast bread and I can't guarantee how that will turn out.

How you make heaven on a plate:

Beat the eggs, milk, cinnamon and nutmeg together until they are frothy and light.

Melt some of the butter in a skillet.  Don't be afraid of the butter here because let's be honest, you are eating French Toast so obviously the diet has just flown out the window.

Put the bread pieces in the skillet and brown each side nicely.  Once you give them the last flip, turn your oven on to 450 degrees to let it warm up.

You'll take the entire skillet with the French Toast and put it in the oven.  This is how the inside of the toast gets cooked.  If you don't cook it in the oven, the center of the toast will be raw egg mixture and that's not very safe or tasty.  Set your timer for 10 minutes.

When the 10 minutes is up, flip 'em over, put them back in the oven and set the timer for another 10 minutes.

After the last 10 minutes are up, your French Toast is ready.  Slather it in butter, jam, whipped cream, powdered sugar or whatever you fancy the most.

On the flip side, my Tuesday has been pretty uneventful and lazy.  I've been writing all day and getting ready to go back to work tomorrow.

In the meantime, Goofball and Goofballette are both still doing what they do best: 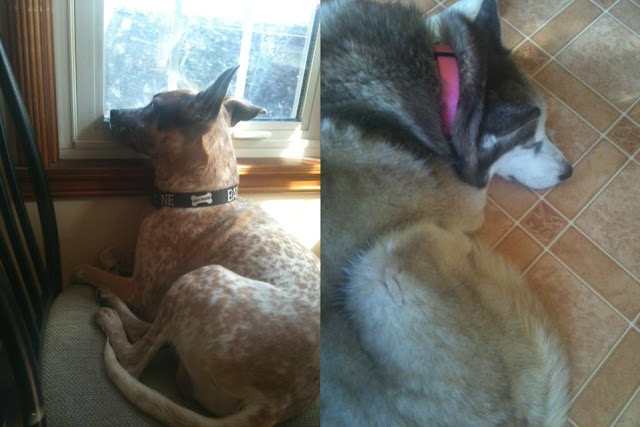