Hillbilly or Redneck? How to Know the Difference... 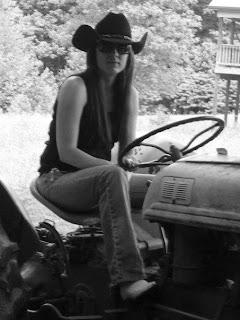 Someone told me a few days ago that I have a bit of a hillbilly accent when I talk.  I guess it's possible.  Especially if I start talking faster than I normally would or if I happen to be in a spirited conversation with someone.

This got me thinking though.  What is the difference between a hillbilly and a redneck?  They can't be one and the same because if they were, they wouldn't be two different words.

Both are defined as derogatory in the dictionary and that actually surprised me.  I knew that they could be used in that manner but any word used to describe someone can be depending on the context that it is used in.  For example, a cracker is a piece of unleavened bread but I didn't know until a few years ago that it was also a derogatory word for a white person (I led a sheltered life as a child).  I had a boyfriend in high school whose father always called me cracker.  Now I sometimes wonder if it was just a sweet little nickname or if he was secretly slamming me for my whiteness even though he was also white.

Some things do occasionally escape me because there is just SO much to ponder and think about!

Anyway... what is the difference between a hillbilly and a redneck?

The dictionary defines a hillbilly as an unsophisticated country person that was originally associated with the Appalachian Mountains... or white folks that live in the country.

The definition of redneck is an uneducated working class white person, namely a farm person, who is a bigot, politically opinionated and from the south.

Hmm... it appears that I'm more hillbilly than redneck even though I really don't fall into that category either.  I'm not from the south, I'm not a bigot, I've never been associated with the Appalachian Mountains and I don't live on a farm... yet.

My guess is that both words are misused quite often.  That seems to happen a lot in today's world.

You have to admit that the "redneck" music really does kick ass though.  Here's one that I've been paticullarly fond of since the first time I heard it...