No Cable, No Internet, No Home Phone... No Problem!

The kids wanted internet and cable when they were staying here when Sweets was in Georgia so they asked if they could have it hooked up and I said that it was ok.  At the time, I was accessing the internet with a Verizon Wireless card and the television in the living room was antenna TV.  It's not that we can't afford it, it's that I don't see how those things benefit US in any way.

Sweets is still not convinced on not having cable in the house.  There are television shows that are on cable channels that he likes and I can understand that but at the same time, the world does not collapse when you can't watch a television show.  There are a few shows that I really like too that are on cable but we'll get into my justification in a moment.  We do see eye to eye on the home phone, we just don't need it because we both carry cell phones.

So, here are the reasons why I think that we are better off without cable and internet in our house:


Reasons Why I Don't Want Cable

1.  The cost.  Again, it's not that we can't afford it but I think it's stupid to spend that amount of money to watch television.

2.  The shows that are on cable are usually available to watch for free or download somewhere online.  Since we don't have internet installed in the house, it would be an excuse to go somewhere with free wi-fi (which is usually a restaurant) and enjoy watching it together while having a meal or some dessert and getting out of the house for a couple of hours.  Or, we could just watch the show on one of the computers with the internet access that we do have (that you'll see in a minute).

3.  There are quite a few channels available on antenna television in addition to the general ones that we knew before cable television.  I haven't counted them but I estimate there are approximately 40 channels that are available to watch.  Of course some are better than others, just like cable and there are some that aren't  available through cable.  There are three WFYI channels alone which are usually extremely interesting.  ION is one of my favorites while Sweets seems to be partial to METV since they broadcast a lot of the older westerns that used to be popular when he was a kid.

4.  In my opinion, watching too much television is a waste of time.  You get absolutely nothing accomplished.  People talk about how busy they are and how many things they have to do then they turn around and sit down in front of a television for hours on end.  Instead of watching a fictitious life, why not live one of your own and get the things done that need to be done?  My favorite one is when people tell me that they don't have time to prepare nutritional dinners for their families, that they eat out of a box all the time and then come to find out they watch a minimum of four hours of cable television every night.  : /  It takes less than an hour to cook a good meal with real food.  Priorities, it's all in the priorities.

Reasons Why We Don't Want Internet

Why should we pay for internet when we can just do this: 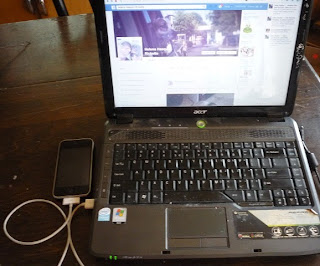 Yeah, that's my iPhone hooked into one of our laptops.  We have access to anything that we want online, with any of our laptops by using  one of the iPhones.  We can watch Netflix, YouTube or Hulu.  We can surf anywhere that we want to go.  The only difference between doing it like this and having wi-fi in the house is that when the iPhone is plugged in, we can use a laptop anywhere, including back by the chicken coop.  With wi-fi, that was not a possibility because the signal wasn't strong enough.  We have our iPhones and pay that bill anyway without using all of our data package so why not put it to good use?  It makes NO difference in our cell bill but it eliminates the need for an internet bill.

So, How Much do We Really Save by Going This Route and What Can We Do With It?

Now, you see, this is the kicker.  Before Sweets went to Georgia, our internet and cable bill ran about $150.00 a month and we had NO HBO, Cinemax, Showtime, etc. and that cost was before any On Demand movie rentals that we may have done that month.  Since we aren't paying that, we are saving minimum $150.00 ish per month, which is actually $1,800.00 a year.

A home phone would run about $25.00 per month unless you add on things like caller ID, three way calling and all the bells and whistles that for some reason people think they have to get.  So by not having a home phone, we are saving at least $25.00 per month, or $300.00 per year.

In conclusion, we are saving a minimum of $2,100.00 per year by doing it this way,, and we had the basics which a lot of people go all out on.  This savings could actually be doubled for those who have all the bells and whistles on their home phone and cable bill.

Now, if you are working a job at $15.00 per hour, how long do you have to work to pay for BASIC internet/cable and a BASIC phone line every month for an entire year?  Here's the breakdown on that for those of you who do not have anything else coming out of your paycheck besides taxes.  If you are paying for health insurance, child support, making less than $15.00 per hour, work less than 40 hours per week or anything else that is not mentioned here, you have to work even more time than what I'm showing you here.

You have to work a month and four days just to pay for basic internet, cable and phone.  Doesn't sound so cost effective when you look at it with a dose of reality, does it?  (This can also open your eyes to things like eating out, Starbucks coffee addicts and a lot of other frivolous spending habits.  Just be sure to figure how many hours you actually have to work before taxes because that is the true figure.)


What could you do with an extra $2,100.00 a year?  For people that complain that they can't afford to feed their family good, organic, non-conventionally grown food... well?

That money could buy a nice amount of freezer beef, chicken and pork from one of your local farmers.  Meat that is not conventionally raised in a cruel, antibiotic and sick environment that tastes well, is fresher than what you buy at the grocery store and is better for you in the long run.

That money can also buy a few mini-vacations a year or at least one great vacation, depending on how savvy you are with finding deals.

You could also just throw it into a savings account, invest it or go all willy nilly with it.  You could use it to pay for at least one semester (almost two semesters at Ivy Tech) of college at most community colleges.  You could buy an older used car with it and not have a car payment to mess with.  You could do a lot with $2,100.00.  It just depends on you and where your priorities are.

What would you do with an extra $2,100.00?  Is anyone else as surprised as I was to find out what your cable, internet and home phone really cost you?

Just a little something for you to ponder this weekend.  :)