Crazyville, Boredom or a Mid Life Crisis... Be the Panda

Do you remember when I used to write a lot?  When I visited the blog at least a couple times a week, minimum?  All of the adventures, the happenings and the crazy fun.  *sigh*  I miss it.

It's like one of my many old love affairs that went sour.  I've become ambivalent.  The one thing that I do know for sure with 100% positivity is that... Lanie is in a slump and I've got to get out of it.  Don't get me wrong, I'm still extremely happy... but I'm bored.  Nothing all that interesting or unusual is happening around here.

Each and every day is the same thing.  Over and over and over and over and over.  Sometimes I feel like Bill Murray in the movie Groundhog Day.  At one point, I contemplated taking up daily drinking but the thought of becoming an alcoholic scares me to the point that it simply won't do.  Yep, this lady is still a firm believer of everything in moderation and that includes my secret interludes with Jack Daniels.  Jack Daniels holds a special place close to my heart and there in lies the fear.

Right now my days around here consist of:


I might occasionally take the dogs out if Sweets asks me to but in all honesty, I don't want to.  This is the first time I have actually been logged onto a computer in weeks which is HIGHLY unusual for me and yes, that means I haven't been writing anything, anywhere which means I haven't been collecting any pay except for residual.  My life has become boring and it's no one's fault but mine.

The only things that I've been posting to social media for the past few months are pictures of chickens, dogs and snarky sayings that make me chuckle because they are honestly kind of hateful and mean.  The posts and things that I've been reading lately have just been ridiculously negative, messy and make me want to write a manifesto to bury in my back yard in the hopes that in 100 years when our country has went to hell in a hand basket that someone will find it and get a glimpse of what this small part of the world was like in the early 21st century.  Crazy, I know so I've got to stop reading that crap.

Something has got to be done.

Maybe it's a mid life crisis.  Well if that isn't just exciting as shit.  The hair has been turning gray here and there for what... 4 years now?  I've noticed a wrinkle or two creeping in and have come to the realization that there are certain things that 41 year old women just simply should not be doing.  Those doors are closed and those options are gone.  For someone that loves having options, that really sucks.

On the flip side, there is always a silver lining to everything, and I do mean everything. 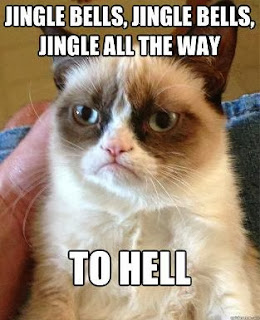 The only other real kick in the ass on my current state of whatever is going through my head is that we are quickly approaching my least favorite time of year.  Christmas.  I can't stand Christmas and all the hypocrisy that comes with it.  I'll save that rant for another day though.  Since I restrained myself last year I figure this year I can really cut loose.  For some people, my Christmas rant will be like a flaming bag of dog poop that shows up on the front porch.  Yeah, it will be just that nasty... but obviously in a different, cleaner way.  Well, kind of anyway.  You've been warned and it's coming.

I'm going to take a few days to stew over this now that I've gotten it off my chest.  Maybe now I'll be able to fall asleep at a decent hour and will take more than one shower a week.  It's time to rejoin the outside world before I lose the ability to interact with other human beings in public.  It's slipping.

Sweets has been a good sport about this little piece of insanity but I'm sure his patience is wearing thin.  If I were in his shoes, I'd be grabbing me by the shoulders, give me a good shake and ask me what the hell is going on between my ears.  I'd do it nicely though because if there's one thing that I don't care for or take kindly to, it's being physically shaken.  Or yelled at.  Or hounded about anything.  Or being told I have to do something that I really just don't want to do.

Wish me luck.  I'm fighting my way back from a crazy, bored, mid life crisis kinda state of mind.  This is new territory for me that I honestly hope to never visit here again.  I flat out refuse to flag it and claim it as my own.