The Most Amazing Man on Earth... 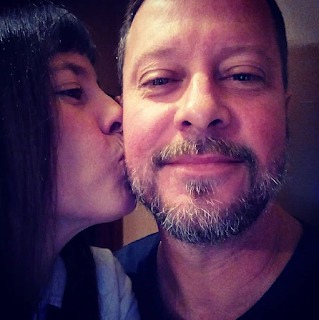 There's something that I want to talk about that for me has been SO important while continuing to go through my recovery, and that is my husband, Cory.

A huge thing to remember is that when you are sick, it's not just you that goes through it.  Everyone around you and everyone that you interact with can be affected by your illness.

Cory has been my knight in shining armor through this and that's no fish story.  He may not understand exactly what I go through with my PTSD, but he protects me from anything that he sees that is upsetting me or could upset me.  If he senses that I'm going into meltdown, even if I'm talking to someone else in public, he has no qualms about asking me if I'm OK in front of them.  In return, I have no qualms about answering with the truth.

He understands the necessities.  The things that I need in order to live a quasi "normal" life.

Thing is, I'm the one with PTSD but we both have to live with it.  As much as my last two write ups have been "me, me, me" I'm not the only one that is going through this.

Without his support and understanding, I have no idea where I'd be right now.

I realize that not everyone is as lucky as I am to have someone that even attempts to understand what is going on in my brain.  Everyone is always so quick to tell those of us that have PTSD to "just get over it."  I get it because I used to think the same thing.  Unfortunately it doesn't work that way and I'm thankful that he realizes that.

When I first started therapy and my meds, I had no idea that he started a deep dive into researching PTSD, what it is and what it does to people.  I can't remember exactly what conversation we were having when I discovered that he knew more than I thought he did, but that's when he told me that he had been reading and learning about what was happening to me that ultimately meant what was happening to us.

I'm lucky to have the support system that I have to help me get through this.  Cory is a HUGE part of that.  Even for calling me out when I need it because sympathy and doing nothing does not get me further down the road to recovery.  Not being afraid to tell me I need a shower when I've been in the same clothes for three days because I LITERALLY forgot?  That's what I see as tough love and that's what I NEED.  Hell... a good call out never hurt anyone that I know of and when I say call out, I'm not talking about using a derogatory or accusing tone.  Just a simple reminder to do the things that I sometimes struggle with for different reasons.

Having some type of support system is critical for getting through this.  I've learned that the more people that respect my boundaries and what I'm going through, the easier it will be for me to "just get over it" and move forward.  I've come to the conclusion that if someone really does love or care for you, they will respect what you need to get better.  If they don't respect what you need to recover, do they really love or care for you?

One valuable lesson that I have learned though this is that there's a lot of people living on this planet.  Some are going to support you and some won't.  The ones that won't are probably better left in the past instead of sharing your future.  Why in the hell would I put energy into someone that doesn't give a fuck about me enough to not pour me over into meltdown?  Then again, like I said in my last write up, people are horrible animals that will intentionally inflict pain and suffering on another... simply because they can and they take pleasure in it.  To me, those people are gross, dirty and lower than pond scum.

You find out who really loves you and is really going to stand by you...


That's all of my thoughts for today.  I hope you are having a fantastic Monday and until next time...